Out This Week: A dinosaur movie and a game with guitars 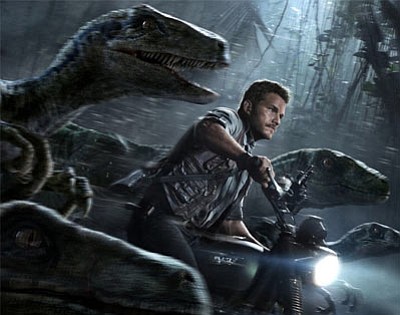 A new theme park is built on the original site of Jurassic Park. Everything is going well until the park's newest attraction - a genetically modified giant stealth killing machine - escapes containment and goes on a killing spree (IMDb.com). We can finally put Jurassic Park 3 behind us. Jurassic World was a phenomenal and just fun film to watch, harkening to the first time we ventured onto Isla Nublar. The film also destroyed the summer box office, grossing $1.6 billion worldwide. Long live the margarita guy!

After an all-night adventure, Quentin's life-long crush, Margo, disappears, leaving behind clues that Quentin and his friends follow on the journey of a lifetime (IMDb.com). John Green is pulling another film out of the Nicholas Sparks playbook: twist the genre ever so slightly, inject enough emotion so that people forget it's basically the same story, profit! I liked "The Fault in Our Stars," but the immediacy of death doesn't seem present in this film.

One peaceful day on Earth, two remnants of Frieza's army named Sorbet and Tagoma arrive searching for the Dragon Balls with the aim of reviving Frieza. They succeed, and Frieza subsequently seeks revenge on the Saiyans (IMDb.com). Watching Toonami and Dragon Ball Z was an after-school ritual for me in middle school, and Frieza was one of Goku's better adversaries. To bring back an enemy that's been dead for well over a decade is something only Dragon Ball Z can do, and we know that this time we won't spend 10 episodes charging a spirit bomb.

Activision couldn't let Rock Band have a monopoly on the music game genre during the current console cycle. This will be the first Guitar Hero in five years, which features a new six-button guitar and a more first-person approach to playing guitar in front of the masses. The set list is pretty heavy and diverse, with songs from Calvin Harris and Pat Benatar to Megadeath and Green Day.

• Fatal Frame: Maiden of the Black Water (Wii U)

In most survival horror games, you're usually armed with a gun and have some way to defend yourself against the malevolent. In Fatal Frame, you're fighting against ghosts with a camera. Koei Tecmo teamed up with Nintendo to take full advantage of the Wii U gamepad, which is almost perfect as an extension of the Camera Obscura. Wii U owners are thirsty for these types of survival horror games, and with the NX on the horizon, hopefully Nintendo will take into account that their core audience is growing up and craves more games like this.

Danny North is the first Gate Mage to be born on Earth in nearly 2,000 years, or at least the first to survive to claim his power. Families of Westil in exile on Earth have had a treaty that required the death of any suspected Gate Mage. The wars between the Families had been terrible, until at last they realized it was their own survival in question. But a Gate Mage, one who could build a Great Gate back to Westil, would give his own Family a terrible advantage over all the others, and reignite the wars. So they all had to die. And if the Families didn't kill them, the Gate Thief would - that mysterious Mage who destroyed every Great Gate, and the Gate Mage, before it could be opened between Earth and Westil. (Goodreads.com). This is the third novel in the Mither Mages series.

'MI:5,' 'Ted 2' entertain differently
Out This Week: 'Magic Mike,' 'Rock Band 4' offer reasons to jam
New 'Splatoon' may be the hit Wii U has been waiting for
'San Andreas' fails to impress, but 'Yoshi' is good fun
'Kingsman' hits Kingman today