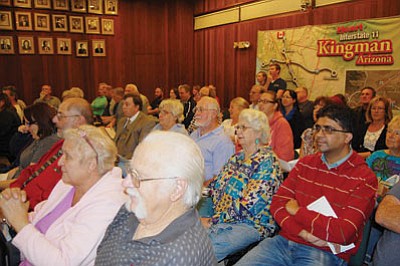 Only one person at a crowded City Council meeting spoke against a special election regarding the implementation of a primary property tax in Kingman planned for May. (DOUG McMURDO/Miner)

KINGMAN - The City Council voted unanimously Tuesday to proceed with a special election next May regarding the possible implementation of a primary property tax.

Here's what was learned:

• The Council could not include the ballot question in the November 2016 general election. When lawmakers consolidated elections in Arizona a couple of years ago, they left out questions regarding property tax increases or, in Kingman's case, the establishment of a primary property tax for the first time since 1980, when the Council in office at the time abolished it.

• City Clerk Sydney Muhle said the cost to hold the special election would fall between $80,000 for an all-mail ballot and up to $125,000 for a regular election.

• Finance Director Tina Moline said a misinterpretation of when tax levies are assessed led her to revise the timeline. Two weeks ago, Moline said the city would start collecting primary property taxes in January 2018, prompting the City Council to extend the sunset date of a temporary half-cent sales tax increase from June 30, 2016 to Dec. 31, 2017.

However, Moline has since determined tax levies would be assessed next fiscal year, meaning if voters approve a primary property tax in May, the revenue would come in sooner than expected and the half-cent increase would expire at the end of 2016. A new ordinance would have to be approved for that to happen.

• While the Council has not formally acted on what the tax would be used for, if approved, there is a general consensus it would be dedicated solely to public safety.

• If approved, the city hopes to raise $3 million a year - about the same amount as what the half-cent sales tax increase has brought in.

Resident Doug Dickmeyer was the only person to speak against the proposal, saying property taxes only affect homeowners, not renters.

In previous meetings, it has been noted that people who own rental properties typically pass on these costs to tenants.

"This is for public safety," said Councilwoman Carole Young. "Property owners benefit the most from that."

The Council has discussed the necessity of finding a stable, permanent revenue stream for the past few years because sales taxes can go up and down each year, making it difficult to budget.

Mayor Richard Anderson pointed out that 2014 was the first year the city collected more in sales tax - the city's only local revenue source - since 2006, and in "real world" dollars, 2014 was actually about $2 million less than eight years earlier.

"And that only happened because of the half-cent increase," he said.

Dickmeyer said he would rather see the Council increase the sales tax even more rather than try to implement a primary property tax, saying motorists who get off the interstate to shop in Kingman pay a huge portion of the sales tax, and that it would be a "better distribution" of the tax burden.

Young said the federal government constantly mandates, but does not fund, new equipment and other items for fire and police departments, which can be expensive and must be paid by local government.

Moline said the Council must direct staff to begin the process of creating the ballot question and approve the amount of money to be raised the first year it is imposed - if voters approve the question.

Councilwoman Jen Miles sought clarification and learned that residents will play a key role in drafting the question.

If ultimately approved, the final property valuations will be set in August, with the city's tax rate included in the upcoming tax bill.

Those bills will be mailed in September. The first half of tax bills are due to the county in October 2016 and the city would start collecting revenue by December 2016, when the half-cent sales tax bump would expire on the last day of the year.

Education key part of push for new property tax
What should Kingman do to secure more revenue?
Can Kingman get voter support for a property tax?
Kingman property tax vote set by state law
Kingman voters to decide fate of proposed property tax