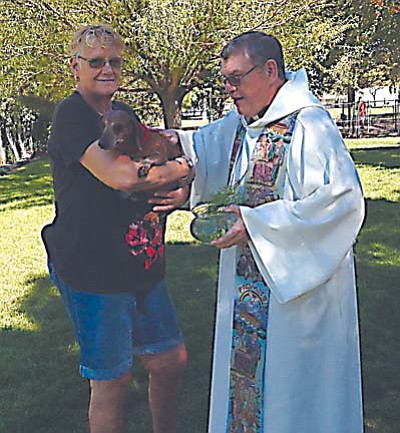 Courtesy<BR> Fr. Leonard Walker blesses Dakota, a dog that was injured and has trouble walking.

KINGMAN - Clergy from three local churches were on hand to convey blessings at the Fourth Annual Blessing of the Animals Oct. 11 at Lewis Kingman Park's dog park.

Fr. Phil Shaw, pastor of Trinity Episcopal Church, opened the event by thanking those present. He then asked Fr. Leonard Walker of the Independent Catholic Church-Divine Savior to say a prayer.

After the opening prayer, Walker proceeded to the small dog area, where he was joined by Deacon Ben Rodenbeck of Trinity Episcopal. While there, Walker blessed Dakota, who was injured in an accident more than a year ago. The dachshund still has great difficulty walking but is a real "trooper," according to his owner, Shannon.

Pastor Ray Christenson of Grace Lutheran Church and Shaw remained in the large dog area to bless the animals present.

It was there that Christenson offered to bless the stuffed animals brought to the park by two little girls, Madi and Peyton.

The Blessing of the Animals is a local event occurring in October each year to honor St. Francis of Assisi, the patron saint of animals.