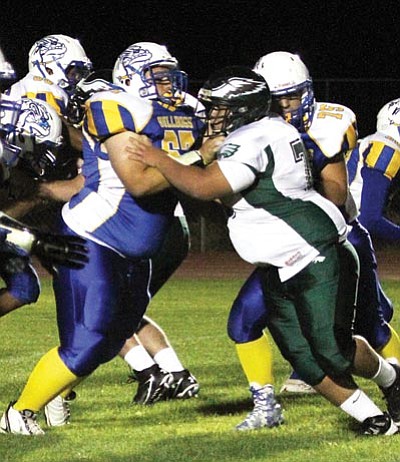 JC AMBERLYN/Miner<BR> Kingman’s Joe Keller, left, is locked up with a Flagstaff lineman Friday night at KHS. Flagstaff’s line won the war and beat the Bulldogs, 49-0.

KINGMAN - Old school, smash-mouth football can be as exciting as today's spread offenses when both teams are prepared to go toe-to-toe. Not so much when it's a one-sided affair as it was Friday when Flagstaff ran over the Kingman Bulldogs at KHS, 49-0.

All game, offensively and defensively, Flagstaff's line pushed Kingman's line backwards. The Eagles rushed for 344 yards and tallied 464 in total offense, while holding the Bulldogs to 136 yards in total offense.

"Both lines were just disappointing," said KHS football coach Greg Tonjes. "We had worked so hard on assignments. They weren't doing anything complex. It's how we performed that disappoints me."

Senior captain Joshua Schreuder was reminded of last year's 0-11 season when he spoke of the thrashing Kingman (1-1 Division IV) took from Flagstaff (2-0 D-III).

"It's not what Flag did to us, it's what we did to each other," the offensive lineman said. "Instead of being a team and working as a unit as we've been taught and had worked as, we starting thinking 'I' - I, I, I, and me, me, me - instead of us. We split into individuals like last year and we got demolished for it."

Kingman began the game looking as if its offense would do some damage to the Eagles. The Bulldogs drove 62 yards after taking the opening kickoff to the Flagstaff 10. It was Kingman's gut-check moment at third-and-4, but the Bulldogs threw two consecutive incomplete passes and the drive stalled.

"The challenge of a young team is when they face adversity for the first time, how do they respond," Tonjes said. "We didn't respond well, and that is what I'm most disappointed about. It's not all about them. We need to coach better, and they need to play better."

Though the loss was huge and ugly, it's only Week 2 and the Bulldogs promise to bounce back when they host Scottsdale Coronado (1-1 D-III) this upcoming Friday. The Dons beat up Cortez two nights ago, 34-0.

"Ultimately, this just means we're not going to go undefeated this year," Tonjes said. "It's as simple as that. Just like last week's win was just one game, so is this loss. Now, if you start piling up the losses, it becomes a problem. But we haven't done that."