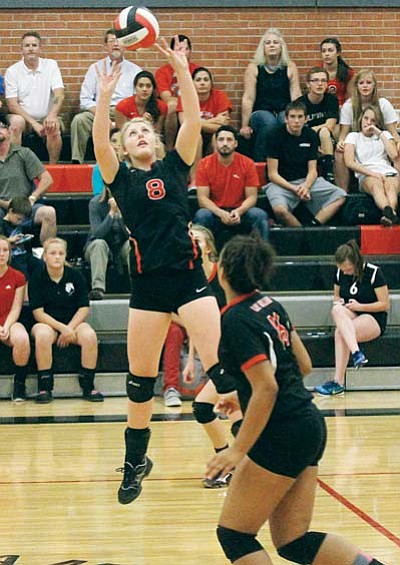 JC AMBERLYN/Miner<BR> Lee Williams’ Sadie Snay sets up one of her 22 assists to Chania Scott during the Lady Vols’ four-set win over Kingman Academy Thursday at LWHS.

KINGMAN - Grabbing a lead and then letting up is a dangerous formula for winning. Lee Williams warded off any disaster when the Lady Vols held off Kingman Academy in high school volleyball action Thursday at LWHS 25-17, 25-15, 22-25, 25-20.

Lee Williams (2-0 Division III) lost some of the intensity it had in the first two games during the third game, and Academy (0-2 D-IV) gained confidence to go toe-to-toe with the Lady Vols the rest of the match.

"The first two games were awesome," said Lee Williams' sophomore setter Sadie Snay. "The third was exhaustion, and we did get a little cocky."

Snay finished with 22 assists, 13 kills and three aces. The sophomore is playing more like a senior for LWHS volleyball coach Traci Rosenbach.

"She's playing so smart right now and playing offensively with her sets," Rosenbach said. "We get so many kills off of Sadie dumping and setting."

Sophomore libero Khori Cobanovich had a game-high 14 digs, including several that kept the Lady Vols in points that they then converted for scores.

"I thought Khori was just outstanding," Rosenbach said. "She was on fire, and that makes a huge difference. The Academy has great hitters, so we knew we had to play defense."

Sophomore Aspen Jackson at 5-feet-8-inches is one of those hitters for the Lady Tigers. She tied Snay for a game-high 13 kills. A year ago, Jackson was a timid freshman who had potential. Jackson showed Thursday she's introduced herself to potential with a number of thunderous kills.

"Aspen is getting into a rhythm right now and I told her to just go out and kill it," said KAHS volleyball coach Ken David. "She started getting that feeling last night (Wednesday) against Chino Valley and now she's really getting her swing."

It was the second consecutive match to start the season that the Lady Tigers started off slowly only to gather steam after falling behind 2-0. David wants his squad to change that modus operandi.

"We just have to figure it out early," the coach said. "We've got to knock the rust off and get rid of the nerves. They put up a good fight, and I'm proud of them."

Shaunti Short had 34 assists for the Academy, and Stephanie Scott had eight digs.

Lee Williams plays excellent defense and passes the ball well. The hitting may be the Lady Vols' weak spot, but they do make up for it with passion and communication.

"We played hard and came out on fire," Rosenbach said. "I thought we did great moving well together and playing together."

The Lady Tigers next play at Goodyear Trivium Prep (0-2 D-IV) Tuesday, and Lee Williams is at Mohave (3-0 D-IV) the same day.