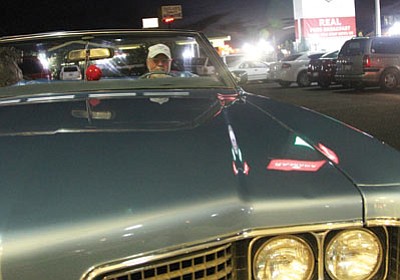 C. Russell sits in his 1968 Oldsmobile 98 Tuesday evening. He was part of a group of car enthusiasts from the “Chillin’ on Beale Street” monthly event downtown that came to meet the group touring from the Netherlands and gave them rides around town in the luxury and style of a classic car. (JC AMBERLYN/Miner)

KINGMAN - Dutchman Dries Bessels and his wife, Marion, are Kingman's 2015 inductees into the Route 66 Walk of Fame. Marion wasn't able to travel to Kingman from the Netherlands with a tour Dries helped organize, but he had about 50 of his fellow countrymen - and women - in attendance Tuesday night at the Ramada Inn on Andy Devine Avenue when Dora Manley presented him with a certificate.

Manley in her presentation said the Route 66 Walk of Fame "was created to acknowledge and honor people who were or are instrumental in the development and continued appreciation of our Mother Road."

They rode from downtown to the Canyon 66 Restaurant and Lounge at the Ramada in style, thanks to regular participants in the Chillin' on Beale Street Car Show and Block Party, who chauffeured the city's foreign guests in their classic automobiles.

Manley said Dries and Marion are founding members of The Dutch Route 66 Association. The couple, she said, helps Europeans - where the highway is wildly popular - plan tours to the U.S. and Route 66.

They also hold receptions for American Route 66 enthusiasts who visit Europe. They also support Route 66 preservation initiatives, both in the U.S. and Europe, said Manley.

Dries was a presenter at last year's Route 66 International Festival in Kingman. Next year, said Manley, Dries and Marion will be the Kings of the Mother Road - at the second annual Best of the West on Route 66 Festival.

The inaugural Best of the West on Route 66 Festival is scheduled for Sept. 25-27.

Here's a teaser on what to expect:

• Sept. 27: Rodeo, free concerts and Route 66 Artists, Authors and Collectors at the Boys & Girls Club of Kingman. Sunday is also Family Fun Day. City Manager John Dougherty said food and drinks will be available, but families can also pack a picnic and enjoy the final day.

Route 66 Walk of Fame bricks part of making Kingman a stopping place
Letter of thanks: Dutch couple honored to be grand marshals
Time to get some kicks on Route 66
Saturday’s parade is going to be huge
Route 66 Festival kicks off; road will honor its saviors