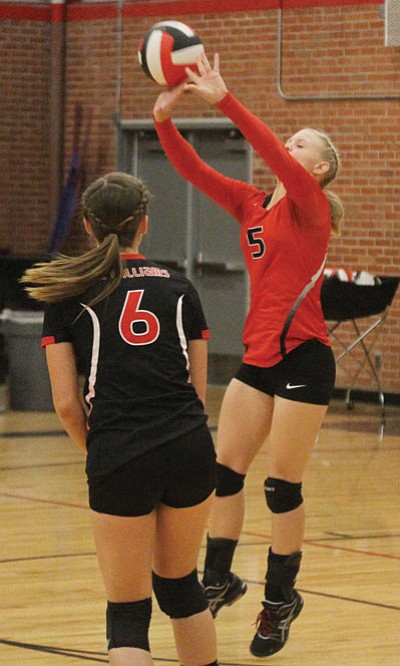 KINGMAN - When you pride yourself on your defense, it has to show up. It didn't for the Lee Williams Lady Volunteers Thursday in a Division III match at LWHS, and Northwest Christian cruised to a 25-16, 25-16, 25-11 sweep.

"Our strength is our defense," said LWHS volleyball coach Traci Rosenbach. "Defense, I believe, can beat an offense. But we did not have a defense."

Northwest (4-2) launched a barrage of kills throughout the match, and Lee Williams (3-2) managed only two blocks as team. That made passing nearly an impossible task for the Lady Vols' back row.

"The back row got torn up because we didn't get any blocks up front," Rosenbach said. "We have great passers. It is our strength. But when that goes, the game is over."

The biggest, most glaring issue for Lee Williams in the match was its problem returning Northwest's serves. The Lady Crusaders weren't any different from most other teams in serving, but the Lady Vols made 25 serve-receive errors. That handed Northwest one-third of its total points.

It was a match where just about every facet of the game failed the Lady Vols. Lee Williams didn't come close to matching Northwest in the kills category.

"Our hitters are just not aggressive," Rosenbach said. "For our team, it's about which one is going to come out and be aggressive and want it. So far, it's been none of them."

Lee Williams played at the Mary Jo Goldey Invitational Saturday in Lake Havasu City and went unbeaten to earn the No. 1 seed for the bracket touranment. The Lady Vols hoped to use the full day of volleyball to get things turned around. Their next regular season match is Wednesday at Bradshaw Mountain in Prescott Valley.