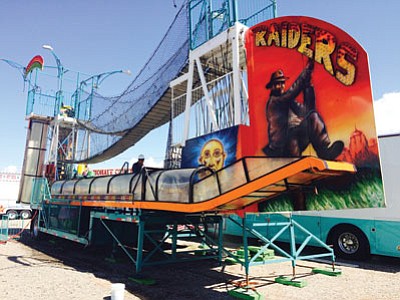 Crews have been setting up carnival rides and food booths all week at the Mohave County Fairgrounds. The popular all-day ride tickets for the carnival are sold out. (HUBBLE RAY SMITH/Miner)

In today's age of digital photography, it's a lot easier to get professional-quality shots, said DiMaria, who taught photography in Las Vegas before moving to Kingman five years ago.

The judging took about four hours of their Monday morning, just a fraction of the time spent by hundreds of volunteers to get ready for an expected crowd of 30,000 to 35,000 during the fair's four-day run.

"I think we need to encourage more juniors and children to enter," said Burkhart, who's been judging photography for five years at the fair. "I've seen a decline in entries over the last few years."

There's a good variety of photography at this year's fair and some of the kids have good shots, Burkhart said. "It's healthy competition," she said.

In another part of the fair's main exhibition hall, Mary Griffis is closely scrutinizing every stitch of an Afghan throw.

"I'm more interested in the work," said Griffis, who's been doing needlework since she was 15 years old and has judged at other county fairs. "I don't care about color. I don't care about the pattern. I want to see that it lays flat, it's squared off, there's no knots, all the ends are woven and it's clean and in usable condition."

She's had crochet entries that smelled so bad, she had to put them in a plastic bag. If it's dirty, she won't even look at it. A winning Afghan could take two to three months to make, Griffis said.

There were more than 230 artwork entries in the "challenged" division, which includes people with physical and mental disabilities and those with Alzheimer's disease, traumatic brain injuries, strokes and other impairments that interfere with their craftsmanship.

"It's gotten so much better," said Mary Ellen Simmons, pointing to a robot made out of tin cans, a solar-powered lighthouse made out of flower pots and a lawn decoration made from old tires. "These folks do amazing things. You see lots of artistic creativity."

At the fairgrounds' administration office, Colletta Comer is busy answering phone calls from people asking about pre-sale tickets and the entertainment lineup. Pre-sale wristbands for carnival rides are sold out, she said.

A couple of food vendors came into the office asking about their packets.

"I'm just making sure people are in the right place and getting the right information," Comer said. "Entries are coming in and getting judged. We'll deal with that for three days."

Gabe Esquibel of UniSource Energy Services was stocking trees near the entrance to be given away to fairgoers who show a copy of their latest utility bill. He's got 350 each of desert willow and mesquite trees.

"These are the best-looking mesquites I've seen. They're usually a foot or two. These are four to eight feet and very little thorns on them," he noted.

Admission is $7, which includes an entertainment lineup featuring the Doo-Wah Riders and McKenna Faith on Thursday; McKenna Faith and Great White on Friday; and ZZ-3 and Snake Oil Sinners on Saturday.