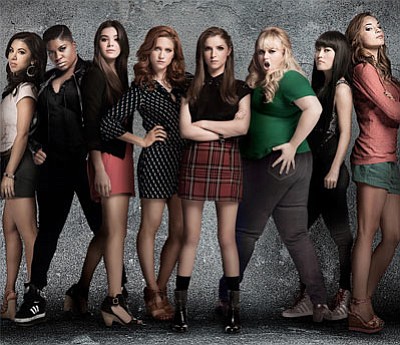 ‘Pitch Perfect 2’ has plenty to offer the acapella nerds. (Courtesy)

After a humiliating command performance at the Lincoln Center, the Barden Bellas enter an international competition that no American group has ever won in order to regain their status and right to perform (IMDb.com). I'm reluctant to call this film a cult classic, but considering the success of the first film, Elizabeth Banks and team did a pretty good job of maintaining the mood and tone here. The humor is strange, and while there's no "cup song" to grace the radio stations for the next eight months, there are still plenty of mashups for the acapella nerds out there to replicate and enjoy.

Prepare your wallets, parents! Another Skylanders release is upon us! The "toy-to-life" video game series returns with a racing-platform-action-adventure game that's sure to keep kids busy for hours on end. For those new to the Skylanders, the game focuses on action figures you buy in real life that can then be scanned into the game to unlock characters and vehicles to use. This series introduces a racing element not found in previous games, and with 20 vehicles and 20 superchargers available at $15.99 a pop, it'll take a hefty bankroll to collect them all. Starter kits are available for $75 for most systems, with the Nintendo variants containing some guest Amiibo figures that can also be used in game.

The yearly FIFA release is here, and this year EA and FIFA finally recognized that women's soccer is actually a thing that people are passionate about. The game will feature female players for the first time, and EA used motion capture on stars such as Alex Morgan and Sydney Leroux to get their playing styles correct in game. Sounds great, right? Well, the NCAA can't have any of that. Earlier this month, the collegiate sports governing body came down on EA and informed them that 13 of the women players included may risk their eligibility if they are included in the game. EA voiced disapproval, saying that this decision "denies these 13 athletes the opportunity to represent their countries in the game," but ultimately agreed to remove them so that the student athletes can play.

This page-turning epic account of the career of President Ronald Reagan tells the vivid story of his rise to power - and the forces of evil that conspired to bring him down. Just two months into his presidency, Ronald Reagan lay near death after a gunman's bullet came within inches of his heart. His recovery was nothing short of remarkable - or so it seemed. But Reagan was grievously injured, forcing him to encounter a challenge that few men ever face. Could he silently overcome his traumatic experience while at the same time carrying out the duties of the most powerful man in the world? (Goodreads.com). So far, O'Reilly has killed three presidents, a general, and Jesus.

Time is running out for the Peculiar Children. With a dangerous madman on the loose and their beloved Miss Peregrine still in danger, Jacob Portman and Emma Bloom are forced to stage the most daring of rescue missions. They'll travel through a war-torn landscape, meet new allies and face greater dangers than ever... Will Jacob come into his own as the hero his fellow Peculiars know him to be? This action-packed adventure features more than 50 all-new Peculiar photographs (Goodreads.com). This is the third and final novel in the "Miss Peregrine's Peculiar Children" series.

Father Tim Kavanagh's adopted son has graduated from vet school and opened his own animal clinic. Since money will be tight for a while, maybe he and Lace Harper, his once and future soul mate, should keep their wedding simple. In "Come Rain or Come Shine," Jan Karon delivers the wedding that millions of Mitford fans have waited for. It's a June day in the mountains, with more than a few creatures great and small, and you're invited - you're family. (Goodreads.com).

'Watchman' presents an Atticus Finch who will surprise
Out This Week: 'Gambler,' 'Paddington' hit shelves
Out This Week: Blu-Ray on life at Penn State after Sandusky
Out This Week: 'Magic Mike,' 'Rock Band 4' offer reasons to jam
Schwarzenegger praised for zombie film role