Time to get some kicks on Route 66 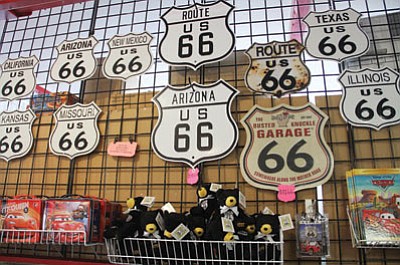 KINGMAN - The Best of the West on 66 Festival that starts Friday celebrates the iconic highway that spurred western migration in the 20th century and provides a snapshot of America's Old West, from ranching and mining towns to Indian territories and expansive mountain and desert terrain.

Dora Manley, event organizer, said the inaugural Best of the West on 66 Festival builds on the success of last year's International Route 66 Festival, which brought some 8,000 visitors to Kingman over four days of events.

Motels were booked to near capacity, restaurants and bars experienced a boost in income and the Powerhouse Museum and Visitor Center welcomed guests from 22 countries and 38 states.

This year's festival is being presented on a smaller scale, drawing primarily from Arizona, California and Nevada. It won't have the international appeal of last year.

Manley estimates 3,000 to 4,000 people will attend this weekend's inaugural festival, and she expects those numbers to double next year when the festival is marketed more toward international visitors. She received $25,000 from the city of Kingman for marketing and festival expenses.

"We're starting with this year and working toward next year," Manley said Wednesday during an interview at Garlic Clove restaurant. "Next year will be international. People in Europe plan their vacations 18 months in advance. So when we were putting this together, we were already working on next year. We laid a lot of groundwork for next year."

Manley said it's sad that younger generations of Americans have lost touch with the highway that was coined as the Mother Road in John Steinbeck's novel, "Grapes of Wrath," and was immortalized in Bobby Troup's song, "Route 66," first recorded by Nat King Cole in 1946.

Europeans' infatuation with Route 66 is on the rise, Manley said.

"They start in Chicago and go all the way to Santa Monica and they get all of America's history along that one road," she said. "One of the people I asked last year told me it was freedom. In their country, they're not allowed to get in a car and go on a road trip."

Zdnek Jurasek, president of the Route 66 Association of the Czech Republic, produced two documentaries about the highway and will be inducted into the Walk of Fame on Sept. 30, when he makes his third trip this year to Kingman.

"It is a life dream of these people to go on Route 66 because many years ago we were a communist country and many people dreamed of Route 66 because Route 66 is well-known," Jurasek told the Daily Miner in May when he led a tour of 22 Czechs through Kingman.

Other Walk of Fame inductees this year include Dries and Marion Bessels, who were instrumental in establishing the Dutch Route 66 Association; Dale and Kristi-Anne Butel, owners of Route 66 Tours in Brisbane, Australia; and Jerry McClanahan, internationally acclaimed artist and author of the EZ 66 Guide for Travelers.

Jim Hinckley, author of several books on Route 66 and "King of the Mother Road" for the Best of the West Festival, said a large part of the highway's international appeal is simply what it represents for America.

"Route 66 has morphed into a living, breathing time capsule with an overlay of Disneyland," Hinckley said. "It's America. It's the best of this country and it represents the best of what we are. It's absolutely pure Americana."

Mom-and-pop businesses along Route 66 exemplify the "can-do spirit" of America, and people on the highway will go out of their way to be helpful, he added.

Manley said the Best of the West on 66 Festival teaches people in Arizona what's so important about the highway. International visitors appreciate things that local residents take for granted, she noted.

"That's why we're the Best of the West. We have cars, Native American dancers, the rodeo, and a lot of rockabilly and sock-hop music for that weekend," she said.

As far as preserving Route 66 history, Hinckley said a professor in Pennsylvania is working on developing a university curriculum encompassing history, geography and sociology classes on Route 66.

"It's a microcosm of America's societal evolution for the last century," he said.

Route 66 is not just about the past, Hinckley added. It's also about the future. The Powerhouse Museum and Visitor Center has the only electric vehicle museum in the world, and there are plans next year for a Tesla tour on Route 66, he said.