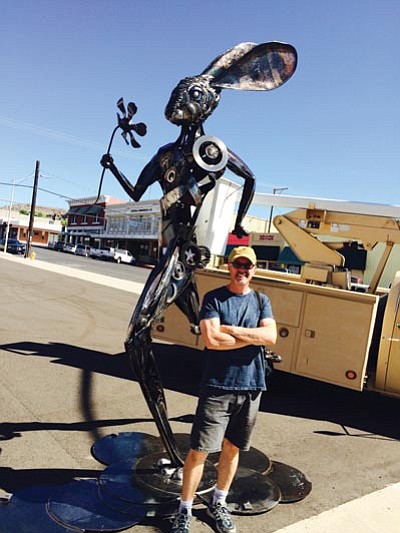 Don Gialanella, artist-in-residence at the ArtHub, created this 12-foot metal sculpture called “Running Hare” for the Best of the West on 66 Festival. (HUBBLE RAY SMITH/Miner)

KINGMAN - The 12-foot, 1,000-pound "Running Hare" sculpture looks to be a popular attraction at this weekend's Best of the West on 66 Festival, judging by the number of people who stopped and snapped pictures of the artwork that was erected Thursday at Fourth Street and Route 66.

"I'm ecstatic," said Don Gialanella, the artist-in-residence at the ArtHub who created the piece with help from the welding department at Mohave Community College and material donors.

"It really turned out better than I anticipated. The face and head - the most important part of the sculpture - is so rabbit-like," he said.

The sculpture will be sold at auction after the festival and the proceeds will be donated to the Route 66 Association of Kingman.

The hare is an "idealized image of speed and travel, adorable and unassuming," the artist said. It's a symbol of ambition, speed and virtue, and a natural inhabitant of the desert.

"I love it. It's just so playful," Harmony Whitt of Golden Valley said. "We were just driving down here and I said, 'Turn around. I've got to go see it.'"

Seth Angle, director of the ArtHub that was built by his father's company, Angle Homes, said "Running Hare" certainly fits into the local environment.

"It's a great sculpture because it encourages you go around it, to walk around it and see the whole view," he said. Standing in front of the hare, Angle said he felt like he needed to get out of its way.

Gialanella, originally from Maplewood, N.J., and now living in Los Angeles, said the sculpture made from recycled metal and automobile parts is one of his more ambitious projects.

The challenge was finding the right pieces, like the bronze used for the pupil of the eye and the differential gear that helps symbolize motion.

"When we cut these metal balls in half, it looks like little fingerprints," Gialanella noted, pointing out details in the hare's swinging back arm. "Don't grind them down. He's carrying a flower like a torch. It's a symbol of motion and the environment."

The artwork will add a wonderful element to the Route 66 environment of Kingman, and will become a photo opportunity for tourists and visitors, he said.

"The project is designed to help give Kingman a unique point of identity, promote tourism and give the public a unique work of art to view," Gialanella said.