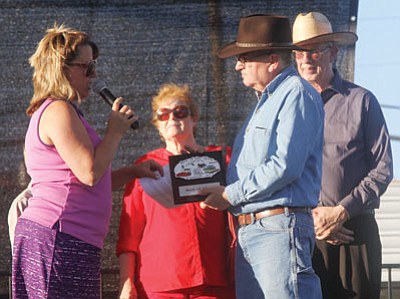 KINGMAN - Route 66 Association of Kingman has joined with "66 Celebrates 90" to promote events for the 90th anniversary of the famous highway.

The route from Chicago to Los Angeles was designated on April 30, 1926, and was officially established on Nov. 11 of that year.

Steve Wagner, a local Realtor and advocate for promoting Kingman as a Route 66 tourist destination, said this weekend's Best of the West on 66 Festival should get people thinking about all the events that Kingman has to offer.

"Our international tourists usually plan their vacations more than a year in advance, so it's never too early to start people thinking about future events," he said.

Directors of the Route 66 Association of Kingman will outline their goals and how to bring them to fruition in the coming weeks. A key component to moving forward on "66 Celebrates 90" events will be endorsement letters from local businesses, Route 66 associations and elected officials.

Some of the upcoming Route 66 events include:

• Oct. 24: Adventure Caravans will be in Kingman for two days. Special activities have been arranged at the Powerhouse Museum and Visitor Center. The company's second fall tour will stop in Kingman on Oct. 31.

• Jim Hinckley, author of several books on Route 66, will be addressing the Miles of Possibilities conference at the Route 66 convention in Edwardsville, Ill., at the end of October.

Starting in April, the "66 Celebrates 90" committee will promote events in conjunction with Chillin' on Beale Street on the third Saturday of each month.

"We want to use Chillin' on Beale Street as a catalyst for seven different events next year," Hinckley said.

These events bring attention to the role that Route 66 has played in the history of Kingman and will play in the future, Hinckley said. They will also be a driving force to bring more visitors to Kingman, as well as gaining international recognition of the 90th anniversary of the historic highway.