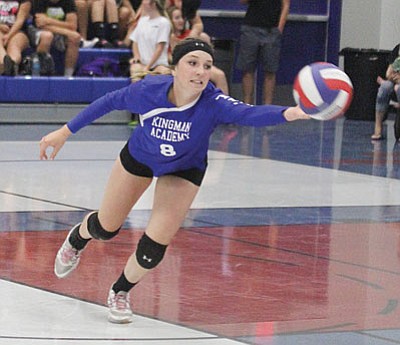 KINGMAN - Lee Williams High won the battle of adjustments in Game 3 against Kingman Academy Thursday night and swept the Lady Tigers in front of an over-capacity crowd at KAHS 25-13, 25-19, 25-23.

After winning the first two sets with relative ease, Lee Williams (5-4 Division III) found itself in a 17-9 hole in Game 3.

After a timeout, the Lady Vols outscored the Academy (1-6 D-IV) 16-6 to take the third and final set.

"Academy changed their game plan and covered areas we had dumped in before," said LWHS volleyball coach Traci Rosenbach. "It took us a while to figure out how to change our game plan, but once we did we came back."

Sadie Snay led Lee Williams with 19 assists and added six kills from the setter position. Whenever the Lady Tigers applied pressure, it was Snay who kept Lee Williams composed.

"I thought we did really well," Snay said. "We didn't get down on ourselves."

It was a raucous environment inside the Betty Rowe Gymnasium for the match, which adds to the adrenaline between the cross-town rivals for players on both squads.

"This was crazy," Snay said. "I love Kingman crowds. It just goes back and forth."

Sidney Clark's serving played a major role in Lee Williams' success. The junior went 27-for-29 with eight aces and kept the Academy's back row off balance.

Marli Lauck had a game-high seven kills for the Lady Vols.

Freshman Chania Scott had three blocks, Madi Arave had 18 digs and Mia Santos came up with 11.

"We were definitely ready," Rosenbach said. "We knew Academy was going to be ready for us. Our defense was great. We dug up balls and handled serve-receive."

Academy showed signs of brilliance in the match, but the Lady Tigers also struggled.

Academy made 10 errors on serve-receive, and combined with Clark's eight aces, it was a problem area for the Lady Tigers.

"I kept telling them all we needed was a pass," David said. "It's a lot about their confidence. They shank one, they get down."