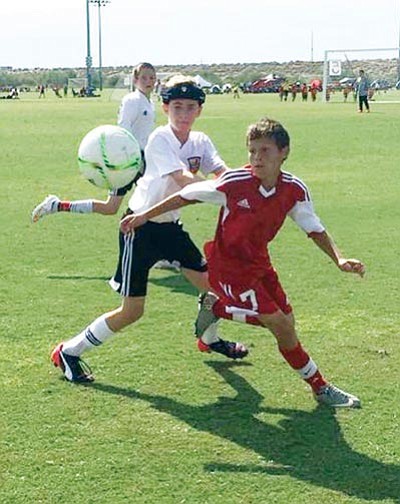 Courtesy<BR> Kingman’s Gabriel Otero will compete for a spot on the state’s 13U soccer team.

KINGMAN - During last year's Yavapai Cup in Prescott Valley, the opponent's keeper dropkicked the ball toward half-field, where a young lad from Kingman trapped it with his chest and returned the ball back toward the goal about 40 yards away.

Gabriel Otero's shot ricocheted off a post and found it's way into the goal without the ball ever touching the ground during the sequence. Plays like that and the potential to be much better has Otero, 12, lined up for a shot to make the roster of the U.S. Youth Soccer Olympic Development Program's 13U Arizona team.

"I'm pretty excited," Gabriel said. "I like my chances."

Otero went to a two-day tryout with approximately 100 other players in August. This list of players was trimmed down to 30, and these kids, including Otero, are scheduled to attend six training sessions in December in Casa Grande. Eighteen players are to be selected for the Arizona team roster and will compete in the 2016 U.S. Youth Soccer Region IV ODP Championships Jan. 7-10 in Phoenix.

Region IV consists of 15 western states and this tournament is the vehicle in which players will be chosen for the Region IV team. That team will compete against the other three regions in a tournament, and the national 13U squad will be selected from that tournament.

"It's a huge pyramid," said Gabriel's father, Gabe. "The higher you go the harder it gets, but Gabriel has made the first step in the pyramid and is looking to make the next step."

As a member of the Kingman Soccer Club's 13U team, Otero led KSC to a 4-0-0 record and the championship at the Valparaiso United Invitational Sept. 18-20 in Phoenix. The week before that, Otero went on loan to help Flagstaff win a tournament.

The boy's understanding of the game is extraordinary. Gabriel said he favors soccer because he finds it to be the most unique. He used that term because the use of hands (except for goalkeepers) is forbidden and soccer is a continuous game with few stoppages of play compared to football and basketball.

Otero puts in 4 ½ hours per week training with his team and another two hours of personal training. He hopes all that work and the upcoming ODP tryouts will lead to the fulfillment of his ultimate goal - playing soccer professionally.

He has his father's support.

"Any child who has the work ethic and desire, along with the dedication can accomplish anything," the elder Otero said. "Yes, Gabriel has that."

Nobody should be surprised if Gabriel Otero reaches the heights he's set for himself. That's what Otero means in Spanish, after all.