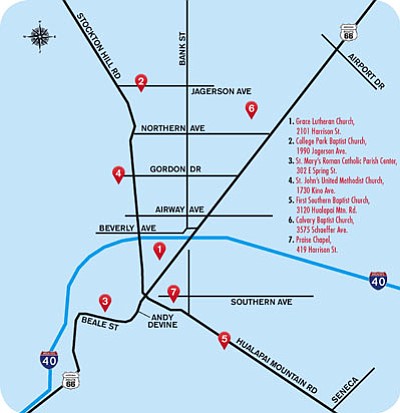 Kingman is planning on new precincts and voting locations as a cost-saving measure. (SPARKY KNOWLTON/Miner)

KINGMAN - In preparation for the March 22 presidential preference election, the Mohave County Elections office has officially approved the consolidation of voting precincts in the county.

The consolidation reduces the number of voting precincts to 24, down from 73, and there will be 32 voting locations for people to utilize.

For Elections Director Allen Tempert, it comes down to efficiency.

"It's cheaper to have fewer voting precincts and to fill them with people. We have fewer people to deal with, and we can have the best of the best in poll workers to do so," said Tempert.

Each precinct requires its own voting location and ballot. The resources to print those ballots and staff each location increase dramatically when they're scaled up.

Tempert and his staff looked at each precinct and combined those that were similar in political parties and characteristics and, perhaps most importantly, were adjacent to each other.

The consolidation does not redraw any district lines, and those that were consolidated are precincts that would have identical ballots during any given election.

Much of the consolidation took place in Kingman, Lake Havasu City and Bullhead City. Between the three cities, 47 precincts were consolidated into seven.

One of these new precincts is Kingman South, which consolidated five precincts in some of the most populated places in town. Instead of limiting residents in this precinct to one voting location, Mohave County Elections will keep three.

"Before, if you lived somewhere, you had one specific location you could vote. That was your only choice. Now, I may have up to four locations and sometime during that day it'll be convenient to you," said Tempert.

"We live in a mobile society. People go places every day. The voting locations are very convenient, centrally located places in the new precinct boundaries."

To keep people from voting twice in a precinct with multiple locations, Mohave County will use electronic poll books at each voting location. Each poll book will be networked to create a live record of who voted throughout a given day.

While poll workers will still issue a paper ballot, they will refer to the poll book before issuing it.

Both the precinct consolidation and the electronic poll books are part of a larger process at the Mohave County Elections office to upgrade its equipment to provide more accurate ballot tabulation, new ADA-compliant voting units, and ultimately save money in putting on elections. Tempert and his staff estimate that they will save just over $180,000 in the 2016 election compared to the 2014 election, a 42 percent savings.

Tempert will present his purchase orders to the Board of Supervisors during its meeting on Monday.

For more information on the precinct consolidation, visit the Mohave County Elections website at www.mohavecounty.us under the "Departments" tab.