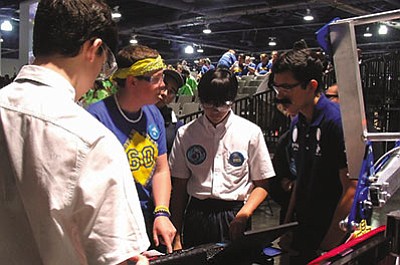 John Lewis (second from right) works with members of his alliance during qualifying matches at the FIRST Robotics Competition in Las Vegas. (JODY SCHANAMAN/Courtesy)

KINGMAN - The Bionic Bulldogs plowed their way to a spot at the National FIRST Robotics Championships in St. Louis, Mo., happening later this month.

Twenty-five students, coaches and mentors from Kingman schools competed in the robotics competition at the Las Vegas Convention Center March 30 through April 2. Through a series of matches over the course of three days, the Kingman FIRST (For Inspiration and Recognition of Science and Technology) Robotics Team 60 stormed into second place among 49 teams from the United States, China, Brazil, Denmark, Mexico and Germany.

"They went to Las Vegas with the attitude that they wanted to succeed and they did," said Kingman High School engineering and robotics teacher Jody Schanaman.

The teams form alliances of three to pit robots against robots over a court to launch a foam ball into castle-like towers. A drive team runs the machine while a spotting team takes notes on other teams' robots.

In between matches, the drive team has two minutes to make modifications to the machine.

"A single team can't make it alone," Schanaman said. "They have to depend on alliances."

Most of the team arrived in Las Vegas March 30 night and immediately began setting up the pit area laying out tools, spare batteries and scrapbooks. The next day's schedule consisted of robot weigh-ins and practice matches.

"We would pick up our robot as another team was moving theirs onto the court," said Lee Williams High School junior Chelsea Heifman. "It was hectic, crazy, stressful and extremely exciting."

Even after the events stopped, the team had dinner and reviewed the days' hits and misses.

"It was non-stop until the pits closed at eleven at night," Schanaman said.

Kingman's club aligned itself with two other teams from California. They participated in a series of 11 matches, winning nine, tying one and losing one.

The students felt confident for the most part but mentioned some pre-event jitters.

"We were a little intimidated by the Las Vegas High Rollers," Heifman said of the well-funded team.

The FIRST program has a global reach of more than 400,000 participating youths, 200,000 mentors, coaches and volunteers, and more than $22 million in scholarship opportunities. It focuses mostly on robot design and operation but also encompasses graphic arts, computer programming, finance, marketing, public relations and web design.

The Kingman club is excited for the upcoming trip to St. Louis April 27-30.

"This will be the first time I've left Kingman," said Kingman High School senior Tommy Myers. "I really regret not doing this sooner."

Funding is presently the biggest challenge.

"We don't have enough money to bring everyone right now," said Kingman Academy High School Junior Rebecca Liggett. Her mother and team mentor Marlene shared the concern: "It's really hard to get excited when you're worried about money."

The team competed in Flagstaff in March but the event didn't go well.

Schanaman didn't quite describe it like that: "It was a learning experience. Perseverance and persistence paid off this week."