When 'The Boss' is funny, it's hilarious 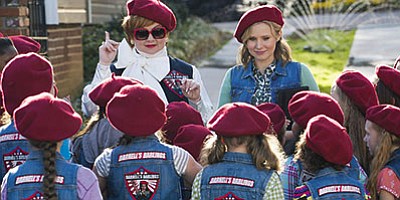 Melissa McCarthy fans, you are either going to love this one or hate it. During my movie exit poll of "The Boss," it seemed that fans of McCarthy's "Tammy" thought "The Boss" was hilarious while "Spy" fans found this movie to be a bit lackluster.

When Michelle Darnell is imprisoned for insider trading, her loyal assistant, Claire (Kristen Bell), helps her pick up the pieces of her broken life by selling brownies. The extremely simple plot is sprinkled with McCarthy's physical comedy, sharp tongue, vulgarity, and wit.

When "The Boss" is funny, it's outrageously hilarious, but there are a few lulls as the plot unfolds. Folks who need continuous, back-to-back comedy may find those periods boring and slow. Folks who find those moments as essential sandwich ends for plot development won't be disappointed by the laughs that punch through each scene.

Parents, this movie is rated R for a reason. A street-fight between two warring baked-goods-selling factions is worthy of Zach Snyder's "300." This battle royale between teen girls is ruthless and violent ... and downright hilarious!

Kristen Bell is lovable but outrageously stale as Michelle's assistant, Claire. The true crime in this movie, though, is the wasted screen time for Peter Dinklage and Kathy Bates. Dinklage plays Michelle's scorned lover and business competitor, Renault. Dinklage developed a perfect character as the Samurai-wanna-be-CEO who deserved more attention.

McCarthy crafted the character of Michelle Darnell - a multi-millionaire motivational speaker and media mogul - over a decade ago. Michelle's hair color, makeup, and obnoxious turtlenecks with flamboyant jewelry and bows are all purposeful character conventions.

If my exit-polls hold true, "Tammy" fans are in for a treat while "Spy" fans may safely pass for Redbox.