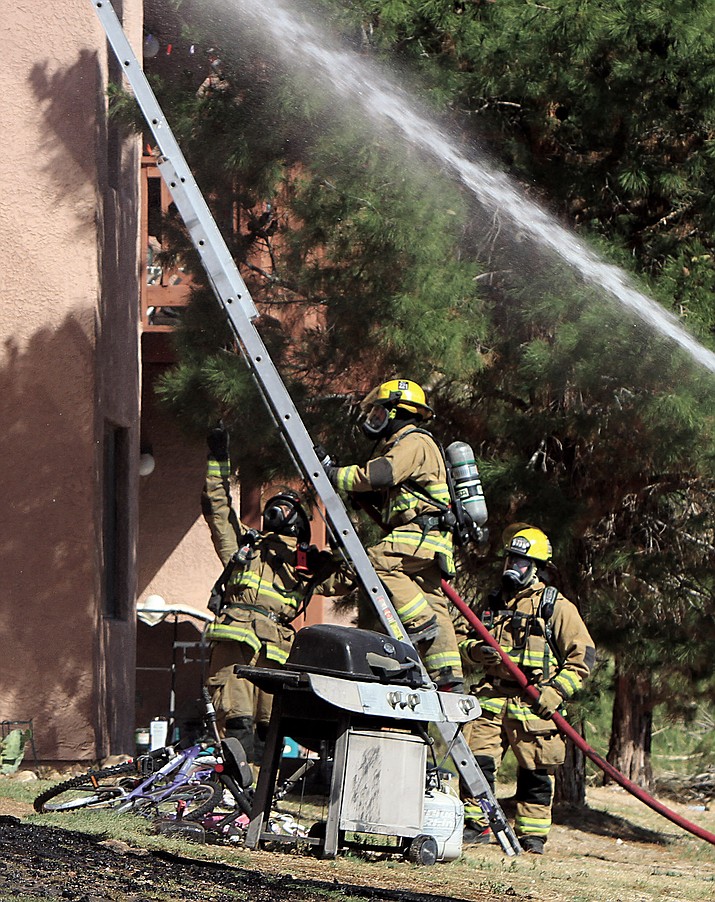 KINGMAN – The Kingman Fire Department’s response times in most instances adhere to the benchmarks set by the National Fire Protection Association.

The department, consisting of 51 career firefighters, five civilians, 15 part-time fire-fighters, and 16 dispatchers, responded to 9,600 calls last year, of which about 75 percent were for medical aid.

Fire Chief Jake Rhoades, who’s been at the helm of KFD since 2014, says the dispatch time (the time it takes to receive a 911 call and relay the information to a fire station) is well within the 90-second average on a 90 percent basis.

“We do phenomenal at that,” said Rhoades. “We really do.”

Following dispatch benchmarks is turnout time, which is the time it takes the fire personnel to embark on their mission after receiving a call. The benchmark is 60 seconds (at a 90 percent clip), and the department is making passing grades, according to Rhoades.

And finally there is the 2 minutes and 40 seconds benchmarked for travel time, which is the time personnel heads out of the fire station to the time they arrive at their emergency destination.

“We don’t do well there,” said Rhoades, pointing out that serving eastern Kingman is one of the biggest challenges. Response times in that area can be six, eight or even 10 minutes, said Rhoades.

He mentioned traffic, lack of a nearby fire station, call volume and lack of an interchange near Interstate 40 as contributing impediments.

“The call volume out there (in eastern Kingman) is only going up. Those calls out there have gone up 60 percent in the last two years,” said Rhoades.

The plan for the future includes a fire station in eastern Kingman. Fully staffed would mean hiring nine full-time personnel, said Rhoades. But that is all contingent on funding.

Rhoades said there is a need to be creative when providing coverage. KFD is implementing a priority dispatch plan, which would have ambulance crews addressing lesser 911 calls by themselves, saving an entire crew and firetruck for other emergencies.

Rhoades said in his latest budget he asked for a rapid response vehicle, which would be a fully equipped SUV, with two firefighters who are trained as emergency medical technicians. That request was denied, as were other requests to upgrade capital equipment.

The KFD is eyeing the future by formulating its first-ever strategic plan covering 2016-2021. It charts the course for the department by outlining strategic initiatives necessary to more effectively deploy resources, protect the health of the community and to increase outreach efforts.

“We are the first line of defense for medical response, extraction, rescue, all that,” said Rhoades. He said Interstate 40 is chock full of threats, with tractor-trailers hauling hazardous material, as are the numerous trains that pass through town daily.

Despite all the responsibilities and challenges, Rhoades said he likes his situation.

“The connection between the fire department and the community is like I’ve never seen before,” said Rhoades, who began his firefighting career in Oklahoma. “It’s an honor to serve. I have a great department and a great bunch of people who provide exceptional service.”