More rules to clarify on voting 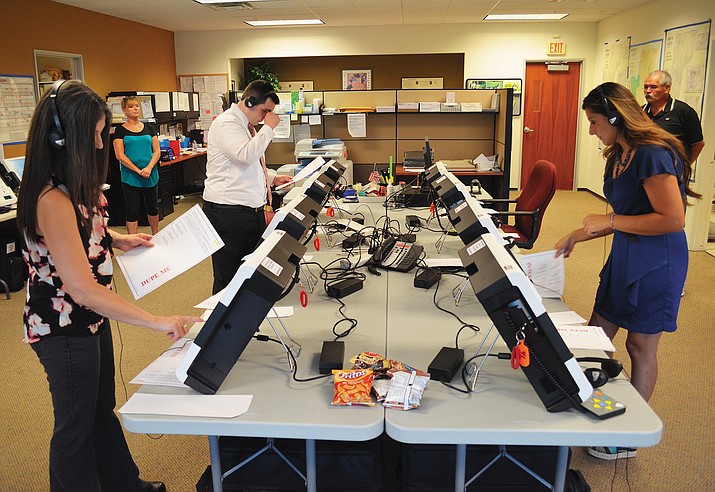 KINGMAN – A mistake in Monday’s election article has led to further clarification of voting rules.

Mohave County Elections Director Allen Tempert confirmed the election is a semi-open primary, meaning anyone can vote regardless of party affiliation. However, The Miner incorrectly stated voters need to pick a party ballot.

He explained that voters registered as Republican, Democrat, Libertarian or Green Party will be issued that particular party ballot at the polls. Voters can’t just walk in and decide to vote for whatever party they feel. Voters registered as Independent or Party Not Designated have the option to choose Republican, Democrat, or Green Party ballots or non-partisan city-only ballots when going to the polls.

“People may think they can come in and choose any party they want when they come in to a poll site to vote,” said Tempert. “We want to cut that off.”

People on the Permanent Early Voter list were sent their ballots Aug. 3. Others who wish to vote early can either call the Mohave County Voter Registration Office at 928-753-0767 on or before Aug. 19 to request a ballot be sent to them. They can also visit the early voting polling site in Kingman at the Kathryn Heidenreich Senior Center, 1776 Airway Ave. not later than Friday Aug. 26.

Some may not get to vote for every office.

Arizona has a two-level voting system. The state requires proof of citizenship to vote for offices lower than the federal levels of president, U.S. Congress and U.S. senator. The state will not allow a voter to vote on state or local elections unless they proved citizenship when registering to vote. The state will, however, allow a person to vote federal level offices only if they registered using a federal voter registration form verses an Arizona registration form.

Senior citizens and college students – who both relocate often or may not have proper identification – are two demographics most often caught in that situation.

According to the Mohave County Recorders’ Office, every resident of the state is qualified to register and vote if he/she:

• Is a citizen of the United States (See requirements below)

• Will be 18 years of age or more on or before the next General Election.

• Will have been a resident of this state for 29 days preceding the election and is able to write their name or make their mark, unless prevented from so doing by physical disability.

• Has not been convicted of treason or a felony, unless restored to civil rights.

• Has not been adjudicated an incapacitated person as defined in A.R.S. 14-5101.

If this is your first time registering to vote in Arizona or you have moved from another county in Arizona, your voter registration form must also include proof of citizenship.

Although this may sound confusing, Tempert said the process is easier than it seems. For anyone interested in getting a look into the workings of the voting process, the Elections Department offers training on running a polling site. Kingman area training is 8 a.m., Aug. 18 – 19 at the County Administration Building at 700 W. Beale St.

“I do not want people to get the idea that this is a chaotic system where it is not. It is very detailed and deliberate process.”

For more information on elections, go to www.mohavecounty.us.