Criticism rains down on airport management 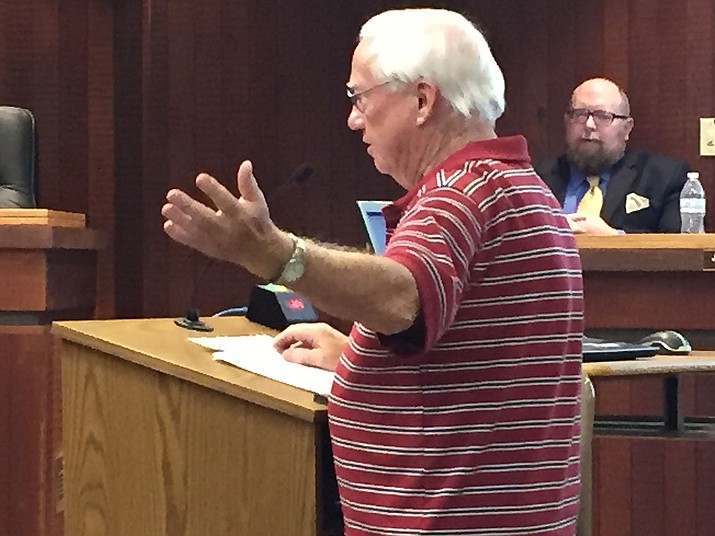 Bill Abbott tells the Kingman City Council that many of the problems at the Kingman Airport are directly attributed to airport Executive Director Dave French and his inability to get along with others.

KINGMAN – Before a standing-room-only crowd of around 60 people at the council chambers, City Council members heard caustic comments about the management at the Kingman Airport and the perceived lack of productivity there.

At the three-and-a-half hour meeting’s end, a “petition for action” signed by citizens was given to the council by Paul Gaines, who has been involved in aviation for 35 years and has a business at the airport. Gaines is a member of the Kingman Airport Users Group.

The words “diamond in the rough” and “potential” bounced around like a pinball by those describing the airport facility, which was originally Kingman Army Airfield, established as a training base for Army Air Force aerial gunners during World War II.

But then disdainful comments rained down heavily on the management of the airport.

“Our airport is stuck in the last century,” said Jill Gernetzke, who said she was a pilot, a Federal Aviation Administration-certified mechanic and inspector, a former air show performer and owner of a small, global aviation business.

Gernetzke said the terminal was in “sorry” shape and other facilities were in disrepair. She came to the airport in 2005 because of its proximity to Las Vegas and Interstate 40 as well as the affordability of the area.

But since that time, Gernetzke told the council she has seen many businesses go away to “more welcoming” facilities, including Aero-Flite, whom Gernetzke characterized as one of the highest-paying employers in the area. She said she knew of only one business that set up business during that time.

Gaines said KAUG was formed to affect positive change at the airport, which he called the largest single asset owned by the city. He said he has spoken to other municipalities and that they would love to have a facility similar to Kingman’s.

He said the airport was in a “stagnant situation” and KAUG has “no confidence” in its management.

Gernetzke said people have basically thrown in the towel over the problems, and she attributed many of the airport’s problems to Dave French, the executive director of the nonprofit Kingman Airport Authority. French was not at the meeting.

The Daily Miner called French at the KAA on Wednesday, but was told he was at a hospital board meeting.

“I’m not going to comment. I wasn’t there,” said Riley.

The KAA attorney, Jeff Goldberg, did attend, and answered questions about all the negativity.

He said the notion that the KAA is not transparent was just not true. Goldberg said there wasn’t a magic wand to wave to bring in development and the KAA was doing its best.

“I’m not saying it can’t be improved,” said Goldberg.

Councilman Stuart Yocum asked why French or Riley weren’t at the meeting. That comment drew cheers from those in attendance.

Bill Abbott, a former KAA board member, attributed most of the problems to French’s inability to get along with others. He said when speaking to others, French drops F-bombs on everybody – customers, pilots, visitors and business owners.

Abbott said he couldn’t find anyone with a positive thing to say about French.

One of Abbott’s stories of French drew gasps from those in attendance. Abbott said French told him the electric automaker Tesla was inquiring about property under the authority of the KAA and French told Tesla he wasn’t interested in it locating any of it operations here.

Abbott told the Council he was self-made from his business “since 1964” and that he never conducted himself with customers or potential customers the way French does.