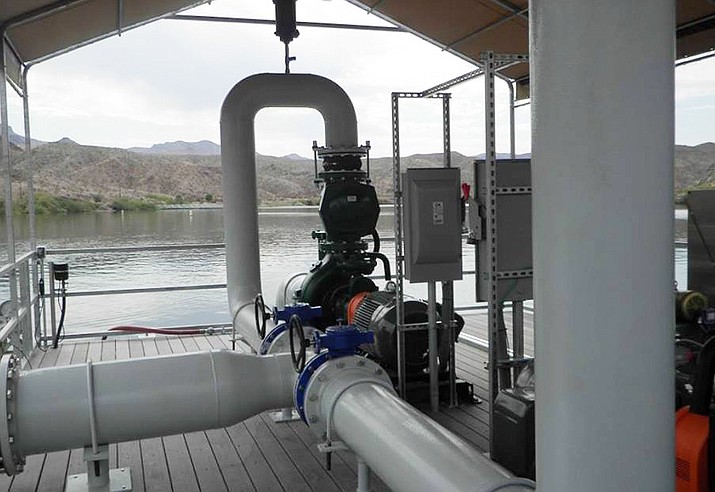 The new water intake for the Willow Beach National Fish Hatchery has been built and successfully tested in Lake Mohave.

U.S. Fish and Wildlife Service officials have announced that a new water intake for the Willow Beach National Fish Hatchery has been built and successfully tested in Lake Mohave. The floating platform system, made possible by a cost-share agreement between the Arizona Game and Fish Department and the wildlife service, will provide a reliable cold water source, enabling rainbow trout production to restart.

The hatchery had been unable to rear or stock sport fish after sustaining pipeline and infrastructure damage in November 2013.

“This is a huge win for Arizona anglers and the local community,” said Larry Voyles, director of the Arizona Game and Fish Department.

Restocking affects Angius’ district by attracting more anglers and tourists to the Colorado River. Angius worked with officials in Washington, D.C., to keep the project afloat.

“You find people in Washington who are sympathetic to your cause and you just keep calling,” she said. “A lot of people were involved in this. I feel very proud.”

Arizona Game and Fish has provided about 60,000 five-inch rainbow trout in an attempt to jumpstart the program. This should enable the crew at Willow Beach to stock catchable-sized trout for Colorado River and Lake Mohave anglers as early as February. Game and Fish also provided significant funding to the pipeline construction project.

Additionally, disease-free rainbow trout eggs are anticipated to arrive at Willow Beach in November, through the U.S. Fish and Wildlife Service’s National Fish Hatchery System, to incubate and grow out to stocking size in the autumn of 2017.

“After a catastrophic infrastructure failure, we worked collaboratively with Senator McCain and the Arizona Congressional delegation, Mohave County, and Arizona Game and Fish Department to solve the problem,” said Dr. Benjamin Tuggle, regional director for the U.S. Fish and Wildlife Service’s Southwest Region.

“It’s been a long time in coming, and we understand the concerns of anglers and the tourism industry in the Lake Mohave area to get this project back on line,” he said. “We are pleased to have the hatchery back in operation to produce important fish.”

The idea for the floating pump was the brainchild of Mohave County engineering teams, including engineers from development services and public works. The design itself was a collective effort between county, game and fish and wildlife service engineers. “I don’t know if there wasn’t an engineer from the county who wasn’t involved,” said County Administrator Mike Hendrix.

Both Hendrix and Angius praised McCain.

“McCain was instrumental in the whole process,” said Hendrix.

“I give him credit in Washington,” Angius said.

“Arizona Game and Fish knows the importance of this program and is proud to be part of the effort to restore it,” said Arizona Game and Fish Commission Chairman Pat Madden. “Recreational fishing is an important economic driver, and this is an investment that will pay dividends for our fishing heritage and the economy of local communities.”

A cost estimate for the intake pump wasn’t available. A ribbon-cutting ceremony will be held at Willow Beach in early autumn.