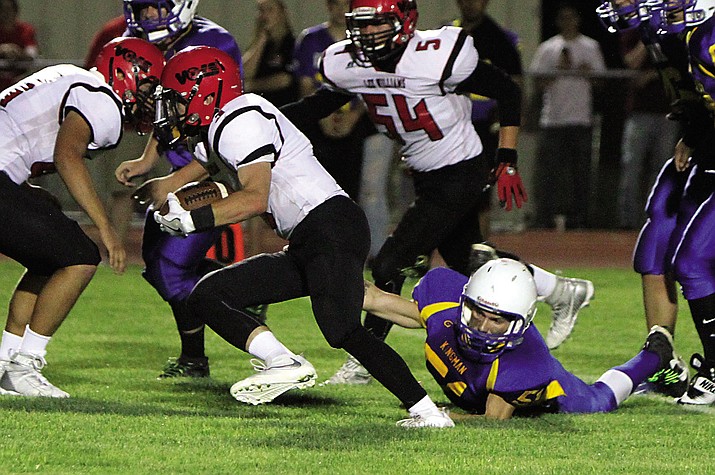 Lee Williams rushed for 250 yards at part of its 352 yards of total offense in the Volunteers’ 28-6 win Friday at Kingman. Paul Giglio (3) rushed for 158 yards for two touchdowns and two 2-point conversions. 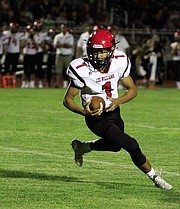 KINGMAN – Once Lee Williams saw that its running game was a viable threat, the spigot opened, the Volunteers rushed for 250 yards and finished with an opening season 28-6 win Friday at Kingman.

“After we figured out we could just pound it, we did exactly that,” said LWHS coach Jacob Iodence after getting his first career win as a head coach. “Our O-line is one of the strengths of our football team. If we can win a ballgame by just pounding the rock, we will. I want to run the football, control the clock and dominate.”

Paul Giglio did most of running, controlling and dominating for the Vols. He rushed for 158 yards on 25 carries with two touchdowns. He gave Lee Williams a 6-0 lead on a 33-yard score midway through the first quarter, taking advantage of a Kingman muffed punt the first time the Bulldogs had the chance to touch the ball.

“It worked well because we have a good offensive line,” the junior said. “We had a lot of nice blocks today, not just from the linemen, but the receivers did their jobs. I was able to find holes and run it through them.”

Giglio’s second touchdown came in the second quarter on a 10-yard gallop and gave Lee Williams the lead at halftime, 20-0. Tyler Miner added 67 yards rushing, and Andrew Davis had 25.

The passing game was effective for Lee Williams, just not as loud as the rushing attack. Senior quarterback Daniel Mazon completed 7-of-10 passes for 102 yards. He threw a 40-yard scoring strike to Justin Sturgill in the second quarter, and added a 5-yard touchdown pass to Aaron Santos in the fourth.

“We did what we needed to do, but we could have done a lot better,” Mazon said. “On my part, I had some incompletions; it should have been a lot higher score.”

The touchdown pass to Santos in the fourth caught Iodence’s eye.

“That last touchdown was a busted play, and Daniel showed great patience,” the coach said. “I was real happy with how he threw the ball. We just didn’t need it a whole lot.”

The Vols’ defense limited Kingman to 131 yards in total offense and seven first downs. The Bulldogs managed to get inside the Lee Williams 30 only once and forced Kingman into five three-and-outs. Kingman got its six points late in the fourth quarter when Jeremy Stewart got through the Lee Williams defense for a 27-yard touchdown run.

Giglio played a key role defensively as well. His play at defensive back was a big reason Kingman was limited.

“We changed our defensive plan after the Wickenburg scrimmage and it worked out really well,” Giglio said. “The D-line came off the ball very well, and the DBs and linebackers did a nice job tonight. It was a good team effort.”