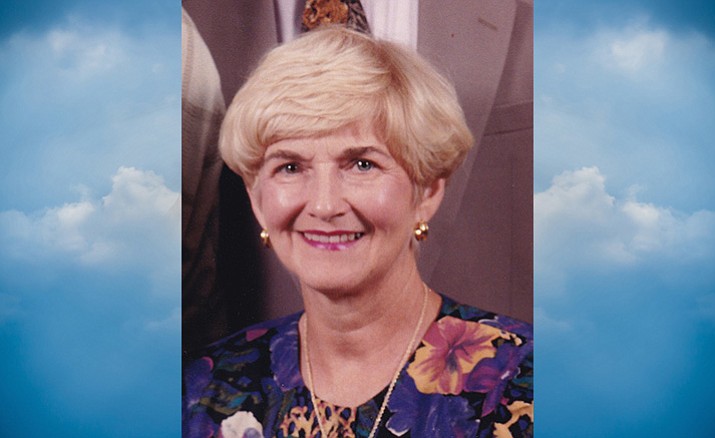 Shirley Ann Shawl Hiestand passed away in Kingman on Nov. 25, 2016, after suffering a long illness.

She was born in Sharon, Pennsylvania, on Sept. 24, 1940, the third daughter of George Irwin Shawl and Dagny Ann Shawl. After graduating from Brookfield High School, Shirley attended Youngstown University with a focus on secretarial studies. She worked for the second largest law firm in Youngstown, Ohio, as a legal secretary.

Laird was transferred to Kingman in 1969. They had three sons: Troy, Douglas, and Craig. After Troy began college at Northern Arizona University in Flagstaff, Shirley went to work for Mohave Education Services for several years.

She also worked for NAU at the Mohave Community College campus in Kingman as an administrative assistant until she retired. She was very well liked and took great pride in her job.

Shirley was a member of St. John’s Methodist Church since 1969. She served as a lay leader, liturgist, usher, handbell member, and she was on the Pastor Parish Relation Committee.

She also was very active in supporting various charitable programs the church sponsored. In 2005, at the Kingman “Women Making History Awards” program, Shirley was presented the award for “Homemaking.” Her hobbies included quilting, crafts, homemaking, and reading.

Shirley is survived by her husband, Laird; sons Troy (Aida) of Bullhead City; Douglas (Desiree) of Las Vegas; and Craig, of Kingman, as well as four grandchildren: Megan, Erika, Matthew, and Kristen. She was preceded in death by her parents, two sisters Janice Djakovich and Ina Vespasian, and granddaughter, Angel.

In lieu of flowers, the family suggests donations be made to the Joan and Diana Hospice Home located at 812 Airway Ave, Kingman, AZ, 86409, or the Mohave Museum of History and Arts at 400 West Beale Street, Kingman, AZ, 86401.