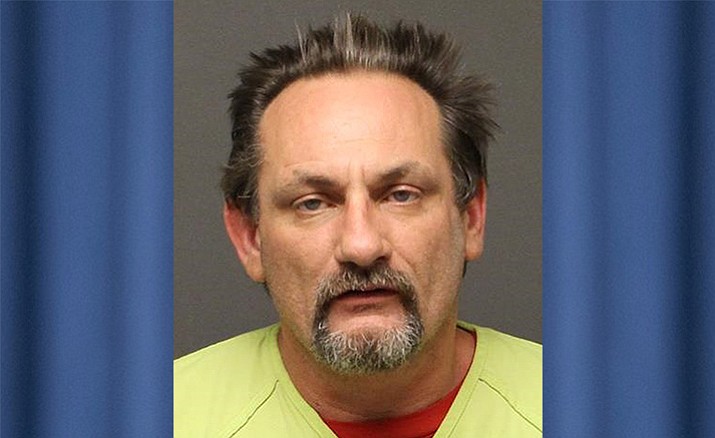 Gragg was arrested on a felony warrant for alleged misconduct involving weapons and drug paraphernalia violations, along with a warrant issued by Kingman Justice Court, three misdemeanor warrants for failure to pay fines and two probation violations,

Durbin was arrested for allegedly hindering prosecution, felony, and false report to law enforcement, misdemeanor. Deputies learned the whereabouts of a wanted person identified as Gragg.

At about 11:25 a.m., deputies responded to a home in the 6400 block of North Louisiana Drive. Deputies contacted Durbin, Gragg’s girlfriend. She said Gragg didn’t live there and closed the front door. Deputies repeatedly used their patrol vehicle loudspeakers to coax them out of the home with no response.

Gragg eventually exited the house with his hands up in the air. He was taken into custody without incident.

During conversations with Gragg, he said Durbin knew he was at the residence but told her to tell law enforcement he wasn’t there. Deputies contacted Durbin and took her into custody without incident. They were transported and booked into the Mohave County Jail. A reported stolen quad was located on the property.

On Dec. 3, Kingman Police arrested Justin Verdell Norton, 44, of Kingman on felony charges of possession of narcotics and dangerous drugs, possession of marijuana for sale, possession of drug paraphernalia and a misdemeanor charge of shoplifting.

Norton was apprehended after allegedly shoplifting at a store in the 3300 block of Stockton Hill Road, during which time information was developed that resulted in a search warrant being served at Norton’s home in the 4000 block of Lum Avenue.

During the search, nearly 37 grams of heroin and amounts of methamphetamine, marijuana and assorted drug paraphernalia were reportedly found.

On Dec. 5, Mohave County Sheriff’s deputies arrested Leeroy Lemasters Jr., 67, of Kingman for the alleged possession of a weapon by a prohibited person, a felony.

Approximately 3:20 p.m., deputies contacted Lemasters at a residence in the 2100 block of East Thompson Avenue during an unrelated manner.

While deputies were speaking with him, they observed a rifle. They learned Lemasters had been formerly convicted of a felony. Deputies also learned Lemasters reportedly never petitioned to have his rights restored to own a firearm. A .22 rifle was seized. He was taken into custody without incident, transported and booked into the Mohave County jail.

On Dec. 7, Mohave County Sheriff’s deputies arrested John Bruce Bradley, 67, of Kingman for the alleged unlawful flight from law enforcement vehicle, possession of marijuana, two counts of possession of drug paraphernalia, three counts of aggravated DUI, a failure to appear warrant issued by Mohave County Superior Court, all felonies, along with a suspended driver’s license and a failure to pay fines warrant issued by Kingman Justice Court, both misdemeanors.

At approximately 1:50 p.m., deputies attempted to conduct a traffic stop, but the driver of the vehicle continued traveling without stopping. The driver pulled into a property in the 3600 block of Robin Lane.

A male driver, later identified as Bradley, quickly exited the vehicle and began walking towards the house. Deputies ordered him to stop, but he allegedly refused. Bradley put his hands into his coat pockets and the deputy drew his weapon. Bradley refused commands and continued toward the residence. The deputy grabbed Bradley’s right arm and took him into custody after a brief struggle. Deputies smelled a strong odor of alcohol on Bradley and he showed signs of impairment. A records check showed him to have a suspended driver’s license and outstanding warrants. A search of Bradley allegedly revealed two pipes with residue and a plastic bag containing marijuana inside his coat.

Approximately 6:50 a.m., deputies responded to a trespassing incident at a home in the 4200 block of North Mallard Drive.

Deputies contacted a reporting party who advised he had recently evicted Hallford, his former tenant. The man also said Hallford was on his property when he called authorities, but she jumped the fence and started walking near the highway.

They later located her nearby at a convenience store. She was taken into custody without incident, transported and booked into the Mohave County Jail.

At about 7:35 p.m., deputies responded to a disturbance regarding a female subject outside yelling for approximately 25 minutes in the 3500 block of Dove Lane.

Deputies contacted her and found her to allegedly be in possession of a plastic bag containing white powdery substance that field tested positive for heroin. She was taken into custody without incident.