Don Martin gets the 'best birthday present' of his 66 years: hunting with his grandson 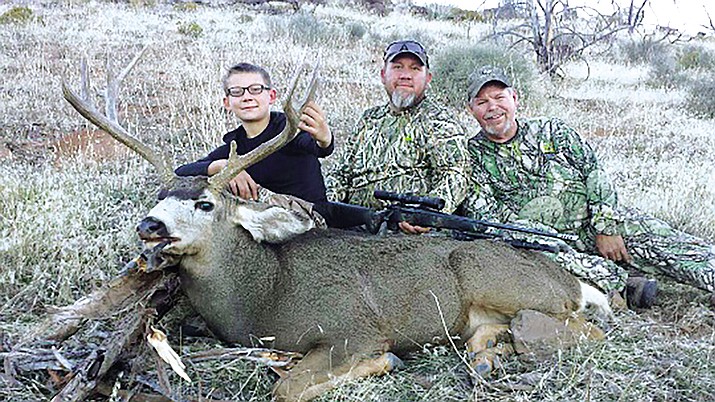 From the left is Logan, Jimmy and Gary Martin. The writer gave Logan, his grandson, his coveted and long-sought-after mule deer tags in the buck-heavy Arizona Strip.

Every year of our lives we celebrate our birthday.

As you get older, you really don’t want to acknowledge them, as it means to you and the rest of the world you are getting close to the end of life.

In my case, these “Golden Years” I’ve heard others talk about haven’t been really so golden; and they are not something I really enjoy. Normally for me, it’s just a date on the calendar.

But this year, I got the best present ever in my 66 years of being on this earth.

The present came from my 14-year-old grandson, Logan Martin, my son Jimmy, and my best friend, Jay Chan.

It all started earlier this year when I found out that I had beat some huge odds when I drew one of the 75 rifle mule deer tags for the Arizona Strip, Unit 13B. I had drawn tag No. 11.

I had applied for this tag for 15 years, and with my Loyalty tag and Hunter Education points, had 17 bonus points going into the draw.

It had been a long wait, and I hoped it was worth it. The Strip is regarded as the best public lands mule deer in the United States.

As the shock of actually knowing that I had drawn a tag of a lifetime wore off, it suddenly dawned on me that at this stage of my life and hunting career, the tag didn’t mean as much to me as I thought it would.

Logan lives in Oklahoma with his dad, Jimmy, mother Nicole and stepmom Shannon. Logan is just starting out in what will hopefully be a long hunting career.

After attending an Arizona Hunter Education class that I was in charge of, and in which Logan excelled, he got to go on his first big game hunt, which was for javelina in Unit 18B.

He took a boar javelina with one shot at 103 yards with my Ruger rifle in 220 Swift.

Then he drew both a javelina tag and a junior’s deer tag for the same unit, but he did not fill either tag. Sometimes that happens. It’s called hunting.

Last year, Logan drew an antlerless deer tag on the Kaibab, and using a Remington 600 rifle in 6mm caliber that I had gave him, he bagged his first mule deer with one shot at 130 yards. With him on that hunt was Jimmy, Jay and myself.

Now with the Strip deer tag in hand, it was time to make a decision.

Did I want to go on the hunt or did I want to sign it over to Logan and give him the opportunity of a lifetime?

It really wasn’t much of a decision.

I called Jimmy and told him what I wanted to do. But there would be conditions.

Logan had to have grades in school that were acceptable to me, his dad and mom.

His personal actions at school, home and in the community would be scrutinized. He was told, get into any kind of trouble and the opportunity to go on this hunt of a lifetime was off the table.

And for Jimmy, it meant dedicating time, effort and resources to make sure Logan was ready for the challenge that this special hunt would present.

Logan answered the challenge playing football, doing well both academically and socially and he and Jimmy did a lot of practicing at the range.

Shooting 22s and Jimmy’s AR-15, along with his 6mm, Jimmy estimated that Logan had fired over 800 shots before he arrived in St, George, Utah, a day before the long awaited hunt would start.

We had decided that maybe the 6mm with its 100 grain bulled might be a little light for those big Strip bucks, so the decision was made that Logan would use Page McDonald’s custom Model 7 Mountain rifle in 260 Remington.

This lightweight rifle shoots a 140-grain bullet, and is very accurate. Both Jay Chan and I shot the rifle before the hunt to make sure it was sighted in.

One other thing. Even though this is a 10-day hunt, because of school, Logan would have just 5 days to find his deer.

Finally, it was time for the hunt to start.

Besides Jay, who has been on almost every big game hunt Logan has been on, would be my good friends and mule deer aficionados Bryan Beckstead, Dan Driggs and Colby Adams. All of them live in nearby St. George. My brother, Gary, was also coming up for the hunt.

They all wanted to be there if and when Logan got a chance to fill the tag.

I spent a couple of weeks before the hunt scouting. Even though I have hunted there many times before, it is 1.5 million acres of public land and in a lot of it, there are no deer.

When opening day came, we went to a spot where not only had my hunters taken some great bucks in the past, but preseason scouting had provided me with some sightings of bucks that I knew Logan would be okay with.

I should add that I told Jimmy we were not holding out or waiting for a giant buck.

We had just 5 days to hunt. Logan had never taken a mule deer buck! I just wanted him to get the opportunity to fill his tag with a mature buck.

“Forget the trophy or selective aspect of this hunt,” I told Jimmy. This was a special hunt with family and friends. It just happened to be in a great area.

As dawn turned to light on Day 1, we were all excited to be in the field. Logan seemed to be a little overwhelmed by all of the activity by friends and family.

Driggs and Beckstead weren’t gone 5 minutes when Driggs came running back and said they had found a good buck close by. We scrambled to get to where the buck was at, but he was gone. That’s deer hunting.

Other buck were spotted and before the morning was over, Jay, Jimmy and Logan went to an area where we thought a big buck and his does had bedded. Turned out they slipped away.

The next couple of days were spent in search of mature bucks. Other bucks were seen and Logan could have taken a young deer, but again, the plan was to try and take a mature buck.

So we all kept searching and looking.

The days slowly slipped away and time was running out. The pressure to let him take any buck was mounting. I explained to Logan that sometimes you will, as a hunter, take a tag home unfilled, and there was no shame in that. It was, in fact, the outdoor experience we were all sharing, and tagging a buck would be just the icing on the cake.

Then Lady Luck smiled on the young hunter.

It was the afternoon of Day 4 when the hunter and his crew stopped to take a break. I had to leave that morning to go pick up the UTV and trailer that I had left in the southern part of the unit.

Logan got out and started glassing. He found deer, but Gary didn’t believe him until he looked through his binoculars and found the group Logan had spotted.

There were a number of smaller bucks and does in the group.

Then Jay saw a juniper shaking and there he was.

A magnificent old regression buck who had spent many years on Black Rock Mountain was raking his antlers in the tree.

With Gary watching the group, Jay, Jimmy, and Logan moved around and above the unsuspecting herd.

Jay knew there would be an angle involved in the upcoming shot, so before they reached the location where Logan would shoot from, they practiced him getting on a downhill target.

As they got into position for the shot, the deer started to move. “Get on him quick,” Jay said.

As the buck started to move off Logan aimed and fired. The shot was at 164 yards.

The shot was perfect, right behind the shoulder and the buck went down quickly.

The old buck was on the downhill side of his life. He is what is called a regression buck. Well past his prime, he was a great one to take out of the herd.

The buck had antlers that were 32 ¾ inches wide, with 6 points on one side and 5 on the other. He had good mass too.

This buck will stay in the Martin family for many years to come, and Logan will tell his children about how he came to get the tag that resulted in him taking a buck of a lifetime.

And the best part of it all? This all happened on my birthday, Nov. 14. It was the best birthday present I’ve ever had!

NOTE: Kingman residents Wade and Crystal Reaves were also hunting on the Strip and got some video footage of Logan’s buck that they shared with us. Thank you.