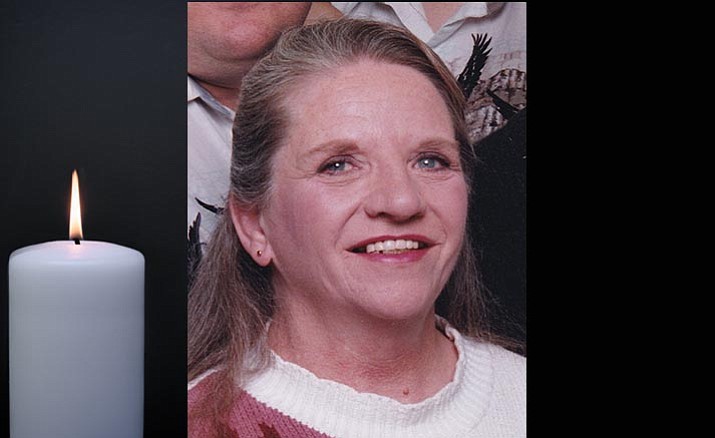 Edith (Edie) June Hedges Proctor Stickler entered eternal life with her Lord and Savior on Dec. 20, 2016 after a 10-month struggle with cancer.

Raised in Sterling and Grand Junction, Colorado and Page, Arizona, where she met her late husband, David R. Proctor.

Following their wedding they lived in Salt Lake City, Utah and Las Vegas, Nevada, where her children were later born.

After his death she moved to Kingman, Arizona to be near her family.

She is survived by her husband of 30 years, Norman Stickler, of Hackberry; her son, David Proctor (Lydia) of Glendale; her daughter, Connie R. Proctor (Theresa Hoffman) of Tucson; her granddaughters, Amelia McElroy and Grace Proctor of Glendale; her sisters, Barbara Siler and Peggy Brown (Joe); and her brother, Terry Hedges, all of Kingman; sister, Trudy Hornick of East Canton, Ohio; and brothers Roger Hedges of Oregon and Larry Pratt.

Her passion in life was her family, friends, her dogs and her horses. She was happiest when helping and being with them. Knowing that her time was short, she celebrated Christmas with her family on Dec. 10. Edie was one of the first women to be a long haul over-the-road truck driver in the late 1970ss and early 1980s.

Later, she earned an EMT certificate and worked in the Tucson Medical Center emergency room.

An artistic person, she enjoyed making afghans and sweaters for family and friends.

An active member of the Women of the Moose for over 40 years, she held almost all of the elective offices and was awarded the College of Regents Degree.

Funeral services will be at Trinity Episcopal Church, 425 Spring Street Kingman, Arizona at 3 p.m. on Tuesday, Dec. 27, 2016, with the Reverend Phillip Shaw as the celebrant of a Requiem Eucharist. The Women of the Moose Memorial Service will be at 2:30 p.m. at the same location. Interment will be in Fleming, Colorado in the family site.

Memorials may be sent to Trinity Episcopal Church, the Women of the Moose, or the Lydia Project in care of her husband Norman Stickler, at 8001 Homestead, Hackberry, AZ. 86411.