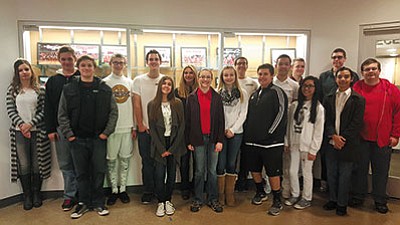 Lee Williams Principal Gretchen Dorner said that the awards recognized the talent, dedication and commitment of both learners and staff. District and school staff are incredibly proud of the accomplishments of the Cambridge Learners. The program works and all Cambridge students are consistently demonstrating college and career readiness.

Top performing learners received their Outstanding Cambridge Learner Awards at a school ceremony on Feb. 3. Sherry Reach, Cambridge's Deputy Regional Director for USA, said, "It is extremely rewarding to congratulate Cambridge learners and teachers at Lee Williams High School who have worked so hard to achieve tremendous success in Cambridge IGCSE examinations. The results are a reflection of the enormous talent in the United States, not only amongst learners but also within the teaching profession. Learners from Lee Williams High School in Kingman, Arizona, have a bright future ahead of them, and I wish them every success in their future."

At the award ceremony, nine students were recognized for earning Arizona's Grand Canyon Diploma awarded to learners who qualified on Cambridge exams and successfully completed the required courses. The Grand Canyon Diploma indicates a student who is college and career ready.