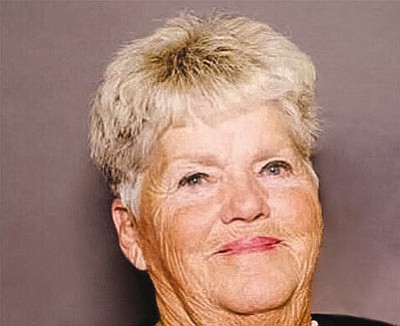 Mary attended Fairfax High School in California. She was employed as a secretary through Douglas Aircraft Company, I Magnin and Toyota for several years before moving to Kingman. She worked as an office clerk at the Kathryn Heidenreich Adult Center until re-retiring. In her retirement, she was very active within her gym community and loved going on city trips.

She will be greatly missed by all. She is survived by her daughter, Diana M. Newton of Kingman; her three sons, William G. Newton of Mountain View, Hawaii, Scott W. Newton of Phoenix, and Ray C. Warren of Wallingford, Conn.; her eight grandchildren, Jade Maglio, Leslie Duffin, Amber Newton, Sean Newton, Michael Newton, Taylor Warren, Ashlee Warren and Hailey Warren; and her eight great-grandchildren. She was reunited with the loved ones who preceded her in death: her parents; her aunts, Burta Fay "Penny" Mayes and Isabelle "Louise" Mayes; husband Lloyd Warren, and her grandson Jacob Newton.

Her family would like to thank Dr. Edgardo Rivera and his staff at the KRMC Oncology department, along with Courtney Shields, Barbara "B.J." McNichols Mills, Victoria Waterman, Denny Colvig and Denise Nelson with hospice. And a special thanks to Marty Adams for all of your help. The family is planning a memorial that will be held later in February. In lieu of flowers, the family asks that donations be made to Kingman Cancer Care Unit - kingmancares.org/kingman-cancer-care/.

Arrangements were placed under the care of Lietz-Fraze Funeral Home and Crematory. Thoughts and condolences may be submitted to www.lietz-frazefuneralhome.com.