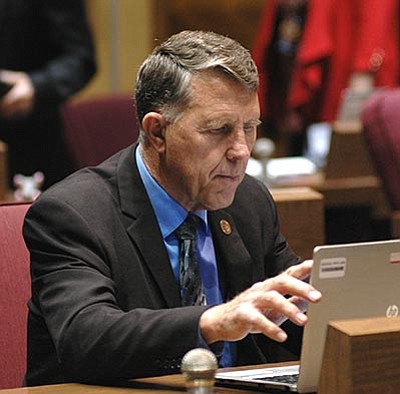 PHOENIX - Three decades after lawmakers pushed teaching creationism in public schools, state senators are debating whether the father of the theory of evolution deserves to be honored.

On a 5-1 vote Monday, the Senate Committee on Natural Resources voted to designate Feb. 12 as International Darwin Day.

Sen. Andrew Sherwood, D-Tempe, acknowledged that the resolution has no legal effect. But he said it is still important to recognize the importance of science and the role Charles Darwin has played in advancing it.

His arguments were supported by Manfred Laubichler, a professor of theoretical biology and the history of biology at Arizona State University.

As to singling out Darwin, versus any other scientist, Laubichler said Darwin's discoveries continue to affect new research and insights. And he said that any efforts to successfully battle the Zika virus are likely to be rooted in Darwin's work.

Sen. David Farnsworth, R-Mesa, said he would have supported creating an Arizona Science Day. But this, he said, is quite different.

"When I was growing up in Mesa, I was taught in school the evolution theory that my ancestors came from monkeys,' Farnsworth said. "Personally, I was offended by that theory, especially when you consider that I hold a deep-seated belief in creationism.'

He said it would be fairer to teach both evolution and creationism, both as theories.

"I believe that truth is absolute and that science and religion should agree,' Farnsworth said.

Sen. Don Shooter, R-Yuma, had a different take on the issue.

"My personal belief is there's no conflict between truth in religion and truth in science,' he said. "The conflicts come from false religion and false science.'

"I think that Darwin did some pretty amazing observations and has contributed to science,' he said.

The measure needs approval of the Health and Human Services Committee if it is to get to the full Senate. But Sen. Nancy Barto, R-Phoenix, who chairs that panel, said Monday she has not decided whether she will give the bill a hearing.

In the 1980s, Rep. Jim Cooper, R-Mesa, led a fight to require that schools teach creationism. When that failed, he came back with a new approach, seeking to mandate that any school that mentions evolution must say it is "only one of several explanations of the origin of the universe and life.'

And in 1983 he managed to get the full Legislature to approve a bill which made no mention of evolution but saying only that if the creation of humanity is taught in public schools it must be presented as a theory.

Bruce Babbitt, who was governor at the time, vetoed the measure as still being a restriction on teaching evolution.

"Such a restriction would be inconsistent with the spirit of the First Amendment which mandates separation of Church and State,' the governor wrote in his veto message. And Babbitt added that he studied evolution in a college paleontology class taught by a Catholic priest.

"I learned then and believe now that there is no conflict between belief in the Bible and understanding the scientific doctrine of evolution,' Babbitt said.