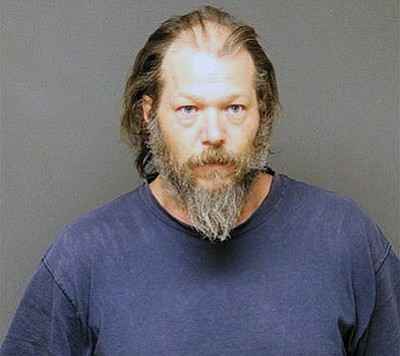 DOLAN SPRINGS - A Kingman man faces serious charges after he allegedly broke into his mother's home, punched her several times, grabbed a pistol from her and tried to shoot her roommate Sunday.

Fortunately, the magazine was not in the .380-caliber handgun and, apparently, there wasn't a round in the chamber when Daniel Dee Lambert, 43, allegedly pulled the trigger twice after pointing the weapon at the man.

The incident occurred at the woman's home in the 14000 block of Hermosa Drive at about 8:30 a.m., when Lambert arrived. His mother, 67, said she opened the door, but kept the steel security door locked. She told Lambert to leave, but he demanded to be let in and began kicking the door.

The woman said she grabbed her pistol, but Lambert reportedly broke in and punched her in the head several times before he took away the pistol. The woman's roommate, a 56-year-old man, entered the room and saw an armed Lambert standing over his mother. He said Lambert pointed the weapon at him and he heard "two clicks, but nothing happened," according to sheriff's office spokeswoman Trish Carter.

Lambert ran from the home and left in a vehicle. Deputies, said Carter, noted the woman had blood running down her face and in her hair and paramedics were called to treat her. They also noticed the door frame was broken and the security door was damaged "beyond repair." They found the magazine to the weapon in the box the woman keeps it in.

Other deputies spotted a vehicle that matched Lambert's driving south on Stockton Hill Road and pulled him over near Hatland Road at about 9:10 a.m. Lambert was ordered out of the vehicle with his hands up and taken into custody. The weapon was seized. Lambert, said Carter, allegedly admitted to punching his mother two times in order to get the gun away from her.