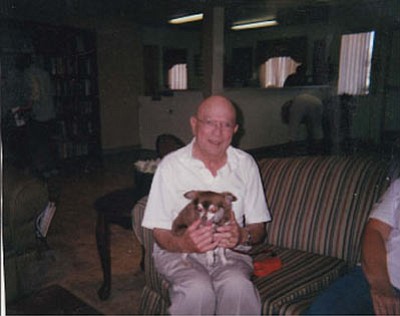 Loren B. Wilson, 91, passed away peacefully at Sunshine Assisted Living with his caregiver at his side on Feb. 14, 2016.

Loren was a petty officer third class in the Navy during World War II, serving his country in Kodiak, Alaska.

Loren attended Northwest Nazarene College in Nampa, Idaho. He earned a degree in art and a teaching certificate. Loren started his first teaching job in 1953 in Tillamook, Ore. He met Marge Zimmer while teaching and they married in 1955. They later moved to take teaching jobs in Morenci, Ariz. While in Morenci, they had two children, Lucretia and Larry. In 1961, they moved back to Oregon and settled in LaGrande. After several years of cold, snowy winters, they moved back to Arizona in 1968. They settled in Kingman and Loren taught art and photography at Mohave County Union High School and later Kingman High School. Loren stayed at KHS until his retirement in 1987. He taught school for 35 years. After retiring, Loren volunteered countless hours at the Mohave County Museum and the Powerhouse. He was also considered the local historian in Kingman and enjoyed the honorary title.

In lieu of flowers, please make donations in Loren's name at Mohave County Museum or Grace Lutheran Church. A memorial service will be held at a later date to allow out-of-town family to attend.

He will be greatly missed by all of them.