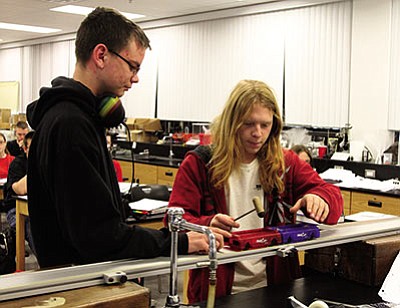 Clarification and addition: Margaret Smith, the LWHS coordinator for the Cambridge Academy, said students can apply for the first time in high school and don't have to begin in middle school. "We have applications available in our guidance office and applications are turned into the guidance office," she said. The contact info is 718-6000, extension 5002. Wendy Hayes is the contact person. Parents and students can get more information on the website at cambridge.kusd.org.

Also, Smith said the Second Annual Cambridge Showcase starts with a reception at 6 p.m. Wednesday at the high school, 400 Grandview Ave. There will be booths of clubs, activities, and academic displays at the student-produced event, with the showcase running from 6:30 p.m. to 8 p.m.

KINGMAN - Students involved in the Cambridge Academy at Lee Williams High School can claim bragging rights for having more award winners than any school that has the program in Arizona.

That success is far from the only benefit the program, now in its fourth year, provides to the students, many of whom started the Cambridge program at White Cliffs Middle School. Lee Williams and White Cliffs are the only two schools that participate in Cambridge in the Kingman Unified School District. It is a global program involving over 10,000 schools located in more than 160 countries and is sponsored by the prestigious University of Cambridge in England.

While most students who participate won't go to Cambridge, getting through the program opens doors to the world's best universities, said Dana Kunert, the Cambridge coordinator at White Cliffs, during a presentation held for parents at the school last week. And they can get a head start. If students meet all of the qualifications, they earn what's called a Grand Canyon Diploma at the end of 10th grade. At that point, they can continue their high school career or move on to a community college or vocational training.

"Students learn how to think," said Margaret Smith, program director at Lee Williams. "Critical thinking is so essential. We're preparing them for jobs that don't even exist right now."

She made it clear the goal is to teach students how to think, not what to think.

While Cambridge University boasts scores of famous alumni, two stand out: Stephen Hawking, known for his work regarding black holes in space and for writing popular science books - despite suffering with amyotrophic lateral sclerosis, a debilitating disease.

Robert Oppenheimer led the Manhattan Project during World War II and is known as "the father of the atomic bomb."

While few people in the world have the IQ of a Hawking or Oppenheimer, the Cambridge Academy isn't a program for intellectually gifted students as much as it is for students who want to excel. A 2.0 grade point average is sufficient and good behavior is expected, "but we also realize kids make mistakes," said White Cliffs Principal Tonia Cobanovich.

Cobanovich said 200 of her students, about a third of the student body, participate in the program. There are 155 freshmen and sophomores and 88 juniors and seniors in the program at Lee Williams.

"They can move on when ready," she said, although only one student who received her degree as a sophomore opted to leave school.

In speaking to parents, White Cliffs coordinator Kunert said a Cambridge classroom is one where "students build a deeper understanding of the material and develop higher-order thinking skills so they can apply what they have learned."

She said the all-important critical thinking is stressed so students can learn how to construct an argument and evaluate evidence. Students also learn to work independently and in a group to bring a project to a successful outcome. If the outcome is unsuccessful, they still learn valuable lessons, said Kunert. They are encouraged to develop an international outlook and be global citizens, as well.

The innovative approaches to both teaching and learning are hallmarks of the KUSD Cambridge Academies, said Kunert. They are designed to help students become confident in working with information and ideas, both their own and the ideas of others; responsible for themselves and respectful of others; reflective as students, which helps them to develop their ability to learn; innovative and equipped for new challenges; and engaged intellectually and socially - which will prepare them to make a difference.

Grades 6 through 8 at White Cliffs are in the Secondary 1 program, where they are given clear learning objectives for English, mathematics, and science, said Kunert. Social studies is taught using Arizona standards that are "enriched" by Cambridge learning techniques.

Eighth-graders take what's called the Cambridge Checkpoint Exam at the end of the year to prove what they have learned since sixth grade. Cambridge University evaluates the exams and provides feedback to both students and their teachers with a focus on both their strengths and weaknesses before they progress.

Overall, White Cliffs Cambridge students have performed above the state average on the AIMS - Arizona Instrument Measures Standards - and AZMerit tests every year, and at or above the global average for Checkpoint Exams, said Kunert.

Those who qualify on tests and complete the required courses could be eligible for the Grand Canyon Diploma, also known as the International General Certificate of Secondary Education, said Smith.

Juniors and seniors take a variety of advanced-level classes, Smith said, which are dual credit courses through Mohave Community College. Those who qualify earn seven credits in the Advanced International Certificate of Education in English language, math, physics, biology, literature in English, history, and global perspectives and research.

Cambridge University selected Lee Williams as a spotlight school and here's why: Smith said nine students have qualified for the Grand Canyon Diploma and 21 students - more than any other Cambridge-affiliated school in the state - received Outstanding Cambridge Learner awards. Two of them earned "Top in the USA" awards, eight earned Distinction awards, and 11 earned Merit awards.

Parents with children in the program also had high praise.

"We had a child in seventh grade four years ago, and we decided to challenge her," said Lisa Samstag.

She said the move provided immediate dividends for her daughter. "I strongly encourage you to get them into the Cambridge program."

"My daughter is excited about learning and my son asks me legitimate questions about his homework," said one father who didn't give his name. "There was a smooth transition between middle school and high school. The program stretches them, but not too far."

Another father who didn't give his name said the Cambridge program is "the closest thing" to a college preparatory school in Kingman.