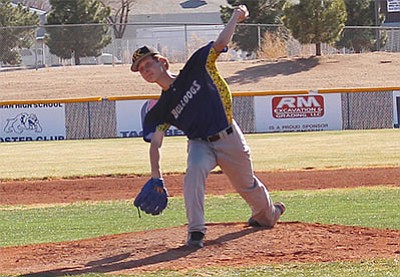 Freshman Rilee Araya winds up for Kingman against River Valley Wednesday at KHS. The game was suspended due to darkness after seven innings, 4-4. (SHAWN BYRNE/Miner)

KINGMAN - It wasn't a win, but it wasn't a loss either. The Kingman High baseball team's youth movement showed itself well, as the Bulldogs and River Valley will have to play another day to decide the winner in the season opener for both teams. The game was suspended due to darkness after seven innings and tied at 4-4.

Kingman had three freshmen in the starting lineup, including pitcher Rilee Araya. In fact, it was freshmen pitching all the way for the Bulldogs after Luke Ness relieved Araya in the fourth inning.

"I was impressed with my pitching," said KHS baseball coach Chad Baitinger. "Rilee and Luke showed they can handle it up here."

Kingman struck first when senior Colton Stanley delivered an RBI-single in the bottom of the third. River Valley capitalized on the first batch of Kingman miscues in the fourth that led to three runs. A misplayed fly ball in right field led to a double and an infield error put the Dust Devils on the board.

"We made a few mistakes that I addressed," said Baitinger. "It's our first game out here and I've got a lot of youngsters, so you're going to see that happen."

The Bulldogs showed resilience despite being young when they scored twice in their half of the fourth to knot it up, 3-3. Derek Brown was hit by a pitch and was sacrificed to second by freshman Hayden Tanner. Sophomore Mason Telford singled to right to move Brown over to third. Brown scored on a passed ball and Telford advanced to second. Back-to-back singles by David Gonzalez and Kurtis Toledo got Telford home.

The Bulldogs took the lead again in the fifth. Anthony Pinto led off with a single. Stanley delivered a shot into right field that was misplayed and allowed Pinto to score. Stanley tried to reach third but was thrown out.

A throwing error by Kingman from first to third allowed River Valley to tie it up in the bottom of the seventh, 4-4, and the Bulldogs couldn't get anything going in their half before the game was called.

All in all, it was a good start for Kingman and the prospects look favorable. The Bulldogs hit the diamond next against Parker at 3:45 p.m. Tuesday at KHS.