On TV: These are not your father's rabbit ears
High definition antennas deliver 27 stations, offering low-cost alternative to cable, dish 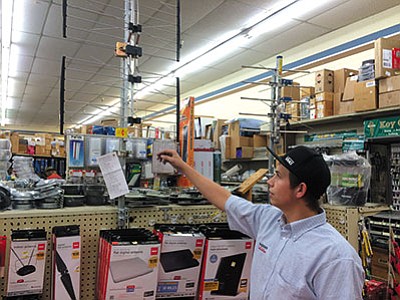 HUBBLE RAY SMITH/Miner<BR> Elvin Gumfory, sales clerk in the electronics department at True Value Hardware in Kingman, shows some of the more expensive outdoor antennas that can pick up 27 over-the-air channels. Antenna prices range from $10 for indoor “rabbit ears” to more than $100 for some of the higher quality outdoor antennas.

KINGMAN - George Crissman hopes to become a future resident of Kingman and reads the Daily Miner online to find out about the quality of life and cost of living here.

After seeing a recent story about Suddenlink charging customers extra fees for exceeding data caps on Internet usage, he wanted to know more about reception of TV channels broadcast over the air in Kingman.

"If I can make a one-time antenna purchase that gives me access to local newscasts, it's a decision I'd like to make," Crissman said in an email to the Miner.

The idea of cutting the cable on TV is appealing to customers who are faced with ever-increasing monthly bills for more channels than they care to watch over the course of the day.

Suddenlink, the leading cable company in Mohave County, charges about $110 a month for a bundled TV and Internet package.

In August, the company implemented a $3 surcharge for sports programming to cover a portion of the "skyrocketing cost" of dedicated sports channels, prompting one woman to complain because she doesn't watch sports.

So what are you going to be able to watch on TV without cable?

As it turns out, local residents can receive up to 27 channels using a simple antenna, though reception varies depending on the size and placement of it.

"The signals are already there. You just have to buy an antenna and know where to point it," said Matt Krick, broadcast engineer for KKAX-TV Channel 36 in Kingman.

Channels available over the air include network affiliates such as KLAS (CBS) from Las Vegas and Fox-10 from Phoenix, locally owned KAZT from Prescott, Kingman's CATV 11 and independent stations My45 and MeTV. There's also a dedicated weather channel and game show channel.

Okay, so you're not going to be able to choose from a smorgasbord of 200-plus channels, but let's face it, who really uses them all?

He'll view episodes of AMC's "Humans" and ABC Family's "Stitchers" when they're available on the networks' Internet web sites.

Most of us have our favorite channels, whether it's news, sports, movies, TV series, travel, religion, food, shopping, reruns or reality shows.

Outside of that, we're essentially paying for stations we don't watch.

"Some of these cable channels ... it's ridiculous. You pay for channels you don't want anything to do with," Krick said.

MTV is a good example, he said. The channel used to show music videos day and night, but hasn't done that in 15 years, instead filling the programming with reality shows, including "Teen Mom," "Jersey Shore" and "The Real World."

"The History Channel doesn't do history. The E! channel should just be renamed the Kardashian channel," Krick quipped. "Basic cable is filled to the brim with commercials, so you're paying to watch commercials."

Cable companies have kicked around the idea of "a la carte" television where customers choose and pay for only channels they watch, but it ruins the profit margins for those companies, Krick said.

He wouldn't mind paying $20 a month for HBO, but when he has to pay for basic cable, the cost runs up to $75 a month.

Antenna prices range from $10 to $50 for a pair of RCA "rabbit ears" that are attached to the television indoors, to more than $120 for the eight-bay Channel Master outdoor antenna with a 75-mile range.

"It depends on the model you want. If you live close to the mountains or if you're going to feed a lot of TVs, you want the $70 model," Krick said. "More signal is available. The more you split the signal, the more the signal decreases."

"It really depends on the distance and how many bays you have as far as how many channels you get," he said. "The indoor antennas don't work that great. Some work better than others, depending on where you're at. Maybe you'll get 10 channels."

Home Depot sells the indoor Flat-Wave HD antenna by Winegard for $28.97 and the outdoor Free-Vision HD antenna for $34.97.

The manufacturer highlights the following features for Free-Vision:

• Link multiple TVs to one antenna.

• Mount where reception is best, connect, scan and watch TV.

If you can get by with major network affiliates and a few independents, putting up an antenna is a good solution to get rid of cable, Krick said.

He suggests external antennas because chicken wire in stucco home construction can block the signals.

Point your antenna toward Hayden Peak, the tallest (8,400 feet) peak in the Hualapai Mountains, Krick advised. It covers the vast majority of Kingman and Golden Valley, and antennas from as far away as Searchlight are pointing at it, he said.

Krick urged local residents to write or call their county supervisors about reinstating the tax for the Mohave County Television District.

The Board of Supervisors reduced the tax by 5 cents to help offset a 15-cent increase in the primary property tax rate last year.

The TV district was formed in 1983 to improve television service in rural areas where reception is often difficult and sporadic. A fee is included in yearly property taxes and amounts to about $3 a year for each land parcel. The funds are used to maintain a bank of antennas at various locations in the county.

"You already pay a property tax for the TV district," Krick said. "More people need to tell their supervisor they use those signals to get their television."