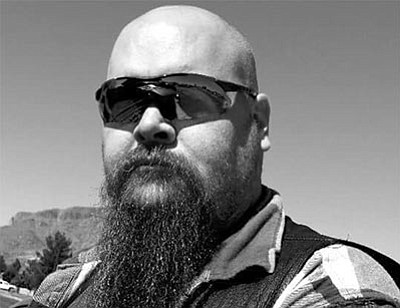 Travis was born in Austin, Texas, on May 5, 1972, to Glenn and Elizabeth Dunki-Jacobs. As a child, he moved to Azusa, Calif., where he lived until relocating to Kingman in 2011.

Travis was a kind and gentle giant, as most would say. He liked that his tall stature would make him appear "tough and scary," but anyone who knew him knew that he was just the opposite. He loved and was loved by his family dearly and it showed "allways." Along with his gentle nature, Travis was full of jokes and sarcasm. There was never a dull moment when he was around. Life is now a little dimmer for those he left, but memories of time shared will shine bright. This truly amazing man will be missed by many.

There will be a viewing at 9 a.m. Saturday, Jan. 9, followed by a memorial service at 11 a.m. at Sutton Memorial Funeral Home, 1701 Sycamore Ave., Kingman.