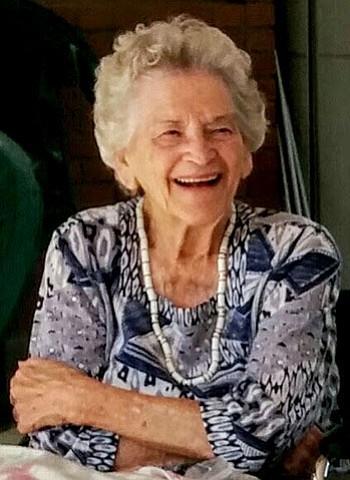 Ruby Juanita Standerfer (Chapman), 96, died Jan. 2, 2016, in Prescott. She was born Sept. 4, 1919, on her grandfather's farm near Roosevelt, Okla., the daughter of Roy and Linda Chapman. She was named Ruby by her brother Forrest. He had heard the name somewhere and liked it, while Ruby's middle name was borrowed from her mother's sister Gertrude. Juanita had been Gertrude's middle name.

Ruby was a member of the Church of Christ and is remembered for being a loving mother, grandmother, great-grandmother, and great-great grandmother. After marrying her husband, they moved to California and Texas prior to ending up in Kingman, where Ruby lived for 60 years (with five years at the Grand Canyon in the middle) prior to moving to the Arizona Pioneers' Home in 2007.

Ruby is remembered for being a hard worker, a faithful church member, an animal lover, a mother who would play ball with her sons and take them to shoot 'em up cowboy movies, and a grandmother who spoiled her grandchildren with fruit juices, pies, Jello, and homemade ice cream (at least once it was made from snow, when Kingman got a little bit). She loved to bake with her grandchildren and read them stories, especially, "Twinkle, Twinkle Little Star" which was one of her favorite poems.

A memorial service will be held in her honor at 2 p.m. on Saturday, Jan. 9, 2016, in the Arizona Pioneers' Home in Prescott.