We are all children of God: 100 Christians, Muslims attend Kingman interfaith service 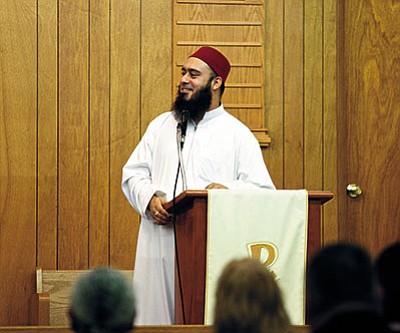 KINGMAN - Just over 100 people packed into Trinity Episcopal Church on Friday evening to listen to six men of faith give prayers of unity and peace.

The clergymen gave prayers and read scripture, and discussed their desire for tolerance and unity among the faiths in Kingman.

"We want Kingman to see everybody how we see everybody," said Father Philip Shaw. "I'm convinced we are all children of God."

The clergymen recognized that, as Pastor Christenson put it, "we live in a polarized world." They have been meeting for the better part of two years, sharing their faith with one another and expressing how they wanted to come to the community in solidarity.

This was their first service together.

"This is a step towards tolerance, peace and unity," said Imam Mahmood.

Future services like this are in the works. The clergymen are looking to bring in more faith groups in Kingman as well, and the multi-faith audience on Friday night welcomed that statement with a thunderous applause.

The group did field a few angry letters and calls over the past two weeks after they announced the service, but there was no protest among the congregation or outside.

Kingman Police Department had two officers attend the service as a precautionary measure.