Meluskey: Give back public land, axe the income tax 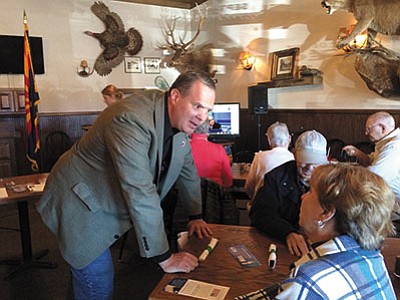 KINGMAN - Alex Meluskey made it clear Monday that he's using personal income and savings from his Scottsdale printing business to fund most of his U.S. Senate campaign, making a run for the seat held by five-term incumbent John McCain.

He makes his own lawn signs and bumper stickers, which is about 25 percent of campaign spending, Meluskey said as guest speaker at the Conservative Republican Club of Kingman's monthly meeting.

All of his contributions are from individuals, and he's taken nothing over $10,000, he said.

"Whatever the federal government wants from me, they can have," Meluskey responded to a question about his campaign finances. "I've lived in every tax bracket. I've been blessed to be able to save money and move some money aside. It's mine. Don't worry about it."

Meluskey touched upon a number of hot buttons during his hour-long presentation, including immigration, education, states' rights and government spending.

"I think it's a shame those ranchers had to go fight in (Burns) Oregon," Meluskey said about the standoff over federal land. "Government should not be in the business of being landowners. Give it back to us and let us manage it. We can do a better job, for sure."

He took a shot at Ward, who resigned her state Senate District 5 seat in December to announce her campaign for U.S. Senate.

He criticized Ward for filing legislation last year that would've intervened in a dispute between Diana Douglas, Superintendent of Public Instruction, and the Arizona Board of Education.

Meluskey is state director of Arizona's FairTax plan and wants to repeal the 16th Amendment, which established the federal income tax in 1913. It's an "abomination," he said.

A club member asked about mining uranium in Arizona, and Meluskey said the government should let the free market decide.

Speaking about the U.S. Senate race in general, Meluskey said the "temperament" in Arizona shows McCain is among the least popular incumbents with his constituents. McCain has faced internal criticism from within the GOP and hasn't polled well with the most conservative voters.

"He's not the people's representative and that's what we need," Meluskey said. "I was asked many times to run for office. I went to church and asked God for guidance. I'm here to serve you, not to serve me."

Polls show Senate race could be a difficult one for McCain
Ward, Meluskey focused on ousting McCain
People, passion pack Golden Corral for Senate Forum
Ward, Medrano welcomed by GOPers in Kingman
Ward will give up state seat to focus on Senate campaign