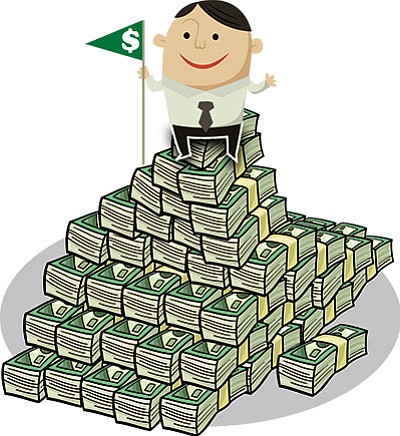 KINGMAN - The first thing Allen Windle would do if he were to be incredibly lucky enough to win the estimated $1.5 billion Powerball lottery is hire a good accountant.

"I'd probably travel the world and then find some good investments," Windle said Tuesday outside Gas 'n Grub on Northern Avenue, where a steady flow of customers streamed in and out to buy gas, pick up a few items and toss a couple of bucks into the black hole of hope.

"I'd do all the things I want, fly everywhere, eat at the best restaurants, and after I'm done splurging, I'd figure out a way to invest for my kids, maybe even my grandkids."

At odds of one in 292 million, nobody seriously believes they have a chance of winning the Powerball jackpot.

But we can all dream.

"It's crazy," Rob Foreman said of Powerball mania that has people spending hundreds of millions of dollars a day across the nation. "You can't win if you don't play."

He admits to buying a couple of Powerball tickets, but he's not going into debt buying them. Some people are buying hundreds of tickets at a time.

And what would he do if he won?

"Well, I wouldn't lose it in five years like a lot of people," Foreman said. "Just find the right person to invest your money. Maybe I'd buy a house in California and Florida. Nothing humungous. I'm not giving it to every person that asks me."

That's probably what Brandy Schreiner would do. She feels sorry for all the people she sees begging for money on the streets.

"To be honest, I would help a lot of people out," said Schreiner, who threw $6 into a Powerball office pool and bought a separate ticket for $2. "I don't need that much money. Nobody does. I'd help my parents with their business, give some to my sisters and donate a lot. Give them all money and they can sink or swim."

Gas 'n Grub manager Amber Jodry said she'd love to be the one to sell the winning ticket and see the look on the person's face. She started selling Powerball tickets 15 minutes into her 5 a.m. shift Tuesday.

One customer spent $1,000 on Monday night and wanted them all printed as separate tickets.

Jodry said she doesn't play the lottery very often, maybe twice a year, but couldn't resist giving it a shot this week.

"I'm just in the race with everybody. God forbid if it actually hits my numbers. I'd have a heart attack," Jodry said.

And if she lived through that?

"I'd set my whole family up, probably buy houses for them and set up an account," she said. "I'd probably give to churches and schools and kids' music programs."

Mike, who didn't want to disclose his last name (so nobody can look him up if he wins), picks up a ticket when he stops at places in Kingman, Golden Valley, Bullhead City and Meadview, where he lives. He's got $10 to $20 in the pot, he said.

"I'm involved with veterans, the VFW. I'd build some homes for homeless veterans, help them out," he said. "You know our economy is still in a recession. That's basically it. Help a lot of people. I'm retired. I'm not going to go crazy. Maybe take a couple trips."

Mega Millions players would spend $1.6B on bills, charity
Powerball winner yet to come forward
Is the Lottery Worth It?
$150,000 lottery ticket sold in Kingman
Get A Grip: Lottery ticket brings nothing but dreams