'Ride Along 2' filled with funny mayhem 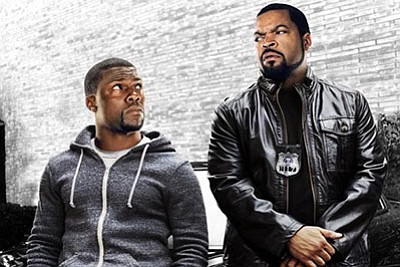 We all have that ONE friend who means well but is a few fries short of a Happy Meal. They would do anything for you but you really don't want to be around when they do it. Yet, these folks are usually blessed with a certain charm and wit that keeps you around - if only to witness their next blunder. That pretty much sums up "Ride Along 2"!

Picking up where the 2014 film left off, Ben Barber (Hart) is finally an Atlanta police officer. He wants nothing more than to become a detective like his begrudging bestie, James Payton (Cube). Barber tags along with Payton on what should be a simple trip to interview a suspect in Miami, but laughable mayhem follows.

For Hart and Cube Fans: Kevin Hart is a powerhouse of unstoppable comedic energy! If you love Kevin Hart you will enjoy several chuckles and full-bellied laughs. Cube is Cube. He is comfortable on-screen and slides through every scene with an enviable charisma.

Action-Comedy Fans: Hart's stamina for physical comedy remains unsurpassed. While the plot was easily plucked from a dusty shelf, the chemistry between Hart and Cube propels the story forward at a steady pace. A car chase that is worthy of "The Fast and the Furious" franchise ends with honorable crashes.

Style-Gawkers: The Miami backdrop is fully exploited; the film is slathered with gorgeous-bodied extras who decorate every scene.

Ken Jeong Fans: I hate to break it to you. This is not the Ken you know and love from "The Hangover." He has some good moments but you know how Ken gets down with his comedy and this ain't it.

Family Audiences: The movie has a lot of physical humor that will keep young viewers entertained but stretches of comedic dialogue and "cop talk" may prove boring for young patience levels.

Action-Comedy Fans: 3 out of 4

Folks who just want a good, easy laugh they don't have to over-think: 2 out of 4

Reel Watchers: Zoo Keeper
Haddish and Hart lead ‘Night School’ to No. 1 with $28M, ‘Smallfoot’ No. 2
Reel Watchers: Cop Out
Even if it isn't for everyone, ‘Game Night’ is chuckle-worthy
‘The Upside’ a light-hearted comedy