Is Kingman's Airport soaring to its potential? 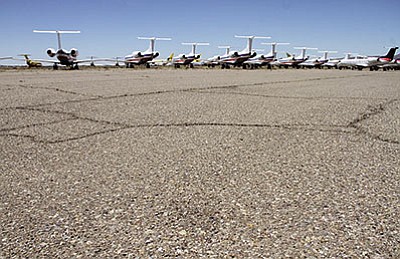 The normally flat south field of the Kingman Airport, pictured in 2013 with several cracks and pock marks that worsen after rainfall. (JC AMBERLYN/Miner)

Paul Gaines would never have relocated his airplane fabrication business from Atlanta to Kingman Airport eight years ago had he known it was going to be a major battle to get things done.

Little things, like the single porta-potty that pilots have to use after normal business hours and on weekends.

They're not allowed to use the airport's administration building, and they haven't been given keypad access to the old terminal, said Gaines, owner of Composite Solutions and a licensed pilot.

Every other airport has access to a proper bathroom, including Seligman and Cottonwood, he noted. Not one of them has a porta-potty.

Then there are basic maintenance needs such as the dross site, a large section of the tarmac that has bubbled up from the melting down of 5,000 airplanes after World War II. It's a hazard for pilots and remains unresolved, Gaines said.

"I'm on the Airfield Committee to get things fixed and we're getting resistance," he said. "It's a toxic environment between airport tenants and users, aircraft operators and the airport authority."

Gaines said he was once part-owner and manager of a small airport in Tennessee, and it's not that difficult of a job.

"We don't have much movement. It's a big airport, but very quiet. I know airports this size and what they can do. We are all suffering as a community and city due to the way it's been managed," Gaines said.

"Aviation is literally my entire life. I cannot impress upon you how important this is. My whole life is here at this airport. I took all the money I had and built my hangar on leased property at this airport."

The group paid for an advertisement in the Daily Miner declaring "no confidence" in the Kingman Airport Authority and petitioning the city of Kingman to cancel its existing contract with KAA.

The airport authority is not accountable to the city or people of Kingman, and has publicly balked at requests to implement performance standards, the petition stated.

The airport users association wants to make sure that any future contract or managerial body of KAA includes "transparent objective accounting and performance measures" that are accessible to the public.

"There will be no economic development in Kingman until the airport authority is changed and we get new people in there," said Marvin Taylor, plant manager at ChromaScape.

Progress at Kingman Airport and Industrial Park is not always evident or even of much interest to the general public, economic development director Bob Riley said during a Jan. 15 "Meet and Greet" with city officials.

Much of the progress involves infrastructure improvements such as the railroad "runaround" recently completed by Patriot Rail at a cost of $335,000, and the $2.8 million reconstruction of Taxiway C and the airport apron scheduled for completion in August.

The authority is matching 10 percent, or $200,000, of $2 million from Arizona Department of Transportation grant funds to acquire about 28 acres of state land for the runway protection zone.

"That's one of the things we discussed," Riley said at the meeting that was attended by City Council members Jen Miles, Carole Young, Mark Abram and City Attorney Carl Cooper.

"Is progress only new buildings you can see and jobs, or is progress all the infrastructure built out here? We're all frustrated that we don't have new industries and construction in the last eight years. It's frustrating to us as well," Riley said.

The economic development director did note that a couple of medical marijuana greenhouses have sprung up at the industrial park, and Renegade Hoof Boots relocated from Antares Point.

Councilwoman Miles said the meeting was "very informative." She learned that $28.4 million, including $1.5 million in KAA funds, has been spent on airfield projects since 1982 to stay in compliance with FAA regulations.

"They're also working hard to inform the community of ongoing improvements and operations out here," Miles said. "The reality is that the people in the industrial park and in KAA, I believe, care very much about the growth of this community."

The industrial park is home to more than 50 companies that employ some 1,800 workers, and is "vital to Kingman's economy," she said.

A 2005 report from Coffman Associates and the W.P. Carey School of Business at Arizona State University estimated the economic impact of Kingman Airport and Industrial Park at $357 million direct output and $95.4 million payroll, based on 2,058 workers at that time.

"Who in this county, state or country could be happy with economic growth during the Great Recession and the pilgrimage of manufacturing to countries with lower wages and less regulations?" Councilwoman Miles asked. "We are just starting to rebound and I believe we will grow as a manufacturing and logistics hub."

The meeting with city officials was a "joke" as far as Gaines is concerned. He said Riley attended a meeting of the Airfield Committee three days prior and said nothing about the public meeting.

All of the airport users know what a gem the airport and industrial park could be. Instead, it's a horribly mismanaged asset, Gaines said.

"People wonder what the problems are here, but rarely take the time to bring the picture into focus," he said. "And that is when and where the airport authority attempts to bamboozle those who ask questions."

City Councilman Abram said he was satisfied with the presentation. It covered the history of the airport authority, from 1947 when the airport was deeded to the county to the agreement with FAA to establish third-party management of the airport and industrial park.

"It is clear that there is a lot of progress going on at the airport, but most of it is unseen or unadvertised," Abram said. "Although it appears there is little progress on selling vacant land in the industrial park, they have been active in marketing the property as well as what buildings are available."

KAA is living up to its contractual obligations, and has received millions of dollars in grants to improve the airport, the councilman added.

Kingman Mayor Richard Anderson said he's heard a couple of people complain about the airport, but he hasn't seen anything in writing.

When the county transferred the airport to the city, the third-party agreement remained in place, so the city has "limited oversight" and reporting based on the agreement, Anderson said.

"We cannot direct KAA to do this or that," he said. "We work with the board of directors. We had originally envisioned a workshop to have internal discussions, but no agenda was established."

Would the city like to see more business development at the airport?

"Absolutely," the mayor responded, "but you have to have people willing to pay and rent space or build a structure out there. We're getting more contacts, but it's a slow process."

The city received a $1 million check last year from Cives Corp., a steel manufacturer from Roswell, Ga., to purchase 25 acres at the industrial park, but the offer did not follow KAA's legal protocol to sell the land.

The porta-potty was placed near airport fuel pumps at the request of the very pilots who are upset with it, said Dave French, executive director of KAA.

The airport authority is in the process of providing access to the terminal building, but the project got delayed because TSA was still renting the terminal through the end of November and had equipment in there.

Security doors have been ordered, and when they arrive, the terminal will be open to pilots and the porta-potty will most likely disappear since the authority is paying for it, French said. Repairs to the dross site and Taxiway B are delayed until a federal lawsuit is settled and the government completes that work.

"We know that damage has been reported to propellers on the dross site, but we don't know any practical way to speed up the federal government's litigation process," French said in an email to the Daily Miner.

As far as the operational portion of the airport being in disrepair, French said both the main and secondary runways are new, and so is the main ramp and taxiway, with the exception of a small parcel on the south end of the ramp and Taxiway C serving the secondary runway.

Those areas will be new by the end of the year at a cost of $2.8 million, mostly funded by state and federal grants.

Scott Brackett, owner of Brackett Aero Filters, would like to know why the airport is allowed to fall into a state of disrepair, and where it ranks on the city's list of assets.

"The airfield is certainly not in a state of disrepair," executive director French countered. "Most of it is new."

French had no estimated value for the airport as an asset, except for associated buildings and equipment, which is about $18 million.

"That completely disregards the value of the remaining 3,000 acres of land, which is not carried on our books," he added. "We lease it. We don't own it. No doubt, it is a valued asset that should be managed as such."

The airport is required by the FAA to keep the runways up to standards, and any revenue generated from the industrial park must go toward airport improvements, Brackett said. That's mandated by Chapter 3 of the FAA Airport Compliance manual, he said.

"Each conveyance (gifting) of revenue-production property federally obligates the public agency recipient to use revenue generated by the property for the operation, maintenance, or development of the airport," the manual states.

The industrial park has generated about $7 million in land sales and ground leases, which would amount to $70 million in grants, based on KAA's 10 percent matching funds. Not even half of that has been spent on airport improvements, Brackett figured.

"In the big picture, something's amiss," said Brackett, whose company has been manufacturing aircraft filters at Kingman Airport since 1984.

"You should be attracting clientele to the airfield side. They've sold land and the industrial park has tenants, but on the airfield side, you've had two businesses in 25 years with money you had to expand."

He and other aircraft owners have had problems in the taxi and tie-down areas, where his plane became entrenched in a giant crack. One aircraft sustained $1,000 in damage from a similar experience, Gerlach related.

"The general feeling is very little interest from management in looking out for that because none of them are users," he said. "Pilots and aircraft owners are an annoyance to management. That's the way we feel. It's a lack of interest in what we use on a daily basis."

One of the taxiways was shut down because the airport authority didn't want to maintain it, Gerlach said.

A new sign popped up on the closed taxiway, which was a "minor inconvenience" for experimental aircraft members, he said, but a huge problem for Aero-Flite, a firefighting fleet that relocated to Spokane, Wash., and took 50 jobs with them.

"We're kind of out of sight, out of mind, from where we're at," Gerlach said. "We're paying commercial rates, yet it's not a welcoming place."