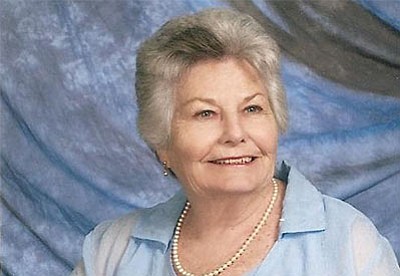 The lovely and much-loved Mary Alice Duey (Mimi) was born on Jan. 26, 1932, to Marjorie O'Dell Duey and Audrey Admiral Duey near San Saba, Texas. She was the oldest of seven children. Her family moved to Arizona, where she graduated from Kingman High School.

She married Bruce Inman in San Diego, Calif., on June 12, 1951, where Bruce served in the United States Navy. They lived there for 23 years of their 52 years of marriage. They returned to Kingman in 1972 with their two children, Brett and Laura. Mary worked for the Mohave County Fairgrounds, was a member of the Daughters of the Pioneers and Manzanita Baptist Church. Bruce died shortly after their 52nd wedding anniversary in 2003.

Mimi is survived by her son, Brett Inman and his wife Jeri, in Tucson; and her daughter, Laura Inman-Cowell and husband Rick, in Lexington, Ky.

Also surviving her are six grandchildren: Reid, Lee and Neil Inman; and Bethany, Victoria and Chelsea; and a great-grandson, Jericho.

Mary's surviving siblings - sister Pat Koger, brothers Nick (Karen), Bill and Jack (Peggy), and sister-in-law Betty Duey all reside in Kingman. She also leaves behind her brothers-in-law, Malcolm Inman, and David Inman and his wife, Jeannie, of San Diego; and many nieces and nephews.

Mary wished to be quoted saying, "I am now with my Savior, Jesus Christ. I still pray daily for all of you, my dear family and friends, until we meet again."

A memorial service will be held at Manzanita Baptist Church in Kingman at 10 a.m. Saturday, Jan. 30. All are welcome.