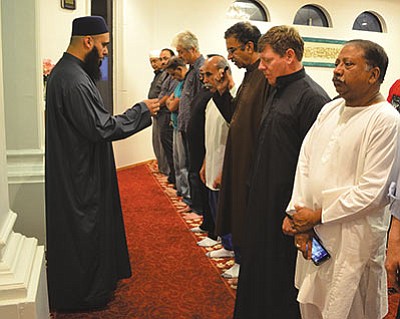 During Ramadan, Muslims must refrain from eating or drinking between dawn and sunset. Once the sun goes down, the feast begins.

Members of the Kingman Muslim community brought a variety of appetizers and dishes. Appetizers were consumed before a call to prayer, or Azan, was delivered in the foyer outside the main prayer hall.

Mahmood then delivered a short sermon using parables from the Quran comparing Muhammed's generosity toward people of all creeds and beliefs and the generosity of local Muslims toward the evening's guests.

"The prophet Muhammed never discriminated between Muslims and non-Muslims," he said. "We love everyone as a human being no matter what religion or color they are. They're always welcome. These are the true teachings of the Quran and the prophet."

After the sermon came dinner.

Some of the dishes included a slightly spicy lentil soup, pulao biryani - a rice pilaf platter with meat - and gulab jamun, an extremely sweet and honey-soaked ball of milk-solids-based desert.

The guests mingled with the congregation for about an hour. Christenson and Shaw left to prepare their Sunday sermons before the final evening prayer commenced.

Non-Muslims being prohibited from entering a mosque is a misconception, according to Mahmood.

"If anyone wants to come learn about Islam and wants a tour of the Masjid, they are welcome," he said.

The KUPA members were enlightened by the Muslim generosity and willingness to open their minds and mosque to other faiths.

"It was very enriching to be able to sit with Christians, Jews and Muslims breaking bread and sharing peace," Shaw said.

An interfaith forum to educate the public about the various religions was planned for May but was moved due to schedule conflicts and illnesses.