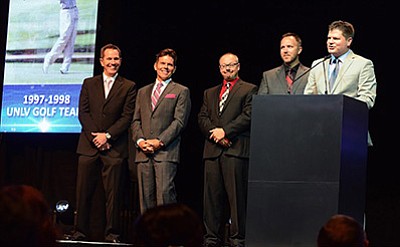 KINGMAN - When Scott Lander was a boy, golf kept him from working on rooftops with his father.

And it has given him entry into his second hall of fame.

Lander, 37, and his teammates from the 1998 UNLV golf team, the NCAA Division I national champions, were inducted as part of the 2016 Southern Nevada Sports Hall of Fame class. The Rebels were placed into the UNLV Athletics Hall of Fame in 2008.

Led by coach Dwaine Knight, the Rebels gave UNLV only its second national championship. The 1990 men's basketball team won the other. Chris Berry, Bill Lunde, Charley Hoffman and Jeremy Anderson were the starters along with Lander to win it all that year. Daron Dorsey, Scott Wingfield and Christian Thornley were also members of the team.

"It's always an honor. It's a blessing to have the run I had," Lander said. "I was with a bunch of good guys, and it's an honor to have been among them."

Lander's run began as a Kingman kid who would walk from his house on Miami Avenue to Cerbat Cliffs Golf Course. Practicing his pitching there was more inviting than playing with the pitch his dad, Scott Sr., would make him use if he didn't stay devoted to golf.

"I told him, as long as he was serious and didn't goof around, I would let him play," Lander Sr. said. "When he did goof off, I put on him on a roof. That got him taking it seriously back on the course."

Lander's presence at CCGC included being a regular in the Junior Golf Program started by former pro Paul Mowry. He held the championship in every local and state tournament he participated in at one time or another. He had two national wins as a 15-year-old, and three more between the ages of 16 and 18.

"Paul got me interested in those days," Lander said. "That spurred me on to play national junior golf, and that got me (hooked)."

Lander was dominant in junior golf and that translated into being a force during his four years as a Bulldog at KHS.

He captured the 4A state championship as freshman in 1992, finished fourth as a sophomore, won again in 1994 and was runner-up his senior year.

Those triumphs led him to UNLV and into two halls of fame. The Rebels broke the record for the lowest total in NCAA Championships history with their 34-under-par and by winning seven out of 15 tournaments played that year. That record was broken two years later by Oklahoma State, but the '98 Rebels still hold the record for lowest score after two rounds at 23-under.

Lander's days at UNLV put him on the course playing with many well-known players.

Teammates Bill Lunde and Charley Hoffman are on the PGA Tour. Hoffman won the 2007 Bob Hope Classic and has five more titles to his credit. Chris Berry caddies on the tour.

Lander was building a solid golf resume before he returned home to Kingman to raise his family and start a real estate business.

He was a four-year starter at UNLV and was a teammate with 2013 Masters champion, Adam Scott. He made the U.S. Palmer Cup team his senior year and suffered only one loss to the team of Great Britain/Ireland. That was to 2010 U.S. Open champion Graeme McDowell.

When UNLV played Clemson, which finished second in 1998 three strokes behind the Rebels, Lander was regularly matched up against Lucas Glover - the 2009 U.S. Open champion. Lander lost to Bubba Watson in a sudden-death playoff of a Rolex Tournament of Champions.

Lander says he doesn't have a whole lot of time for golf much these days with five children and his business. But the game is starting to creep back into his life.

"I have five kids who are starting to get out there," he said. "I don't see myself as ever coaching like Coach Knight, but I'm sure I'd have fun with it. It is something I'd like to give back to the community."

And that would certainly keep him off any rooftops.