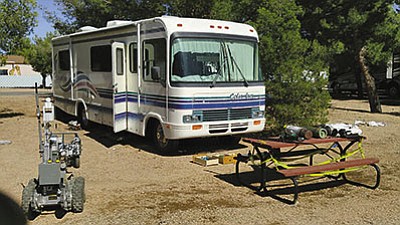 A police robot stands outside of a motor home that belonged to suspected Nevada bomber Glenn Franklin Jones, 59, who died Wednesday in Panaca, Nev., after allegedly blowing up the home and car of a former employer. The case led to this home in Zuni RV Park in Kingman, where Jones lived for the past several months. (Courtesy)

LAS VEGAS (AP) - A 59-year-old man who authorities say drove a rented car from Arizona to a rural Nevada town and detonated two bombs at the house of former co-workers shot himself dead before the blasts erupted, according to autopsy results made public Sunday.

Jones' body was blown up in the blasts in Panaca. Fudenberg said the body was identified through fingerprints.

A motive for the bombings hasn't been disclosed. Federal, state and local authorities are still investigating the type of fuses or detonators used to trigger the powerful Wednesday evening blasts.

"He definitely ignited the devices," Lincoln County Sheriff Kerry Lee said. "We don't know what with."

A damaged semi-automatic handgun was found in the rubble following the blast, and Lee said authorities believe Jones it used to kill himself.

Lee said residents Tiffany Cluff and two daughters fled barefoot from the house before the blast. Husband Joshua Cluff and another daughter weren't home at the time. The sheriff said the family of five has been cared-for since the explosions by family and friends. Messages left for the Cluffs by AP haven't been returned.

"I guess he was bent on destruction, but not killing," neighbor Richard Katschke said of Jones, a former nurse who once cared for Katschke's mother at Grover C. Dils Medical Center in the neighboring town of Caliente.

Katschke and another neighbor, Dennis Sanders, said Jones knew the Cluff family and helped the Cluffs build the house that was badly damaged.

A hospital administrator confirmed that Jones and the Cluffs worked together as nurses, and that Joshua Cluff was Jones' supervisor.

Lee said investigators were trying to confirm whether Jones had military experience.

Sanders said Jones appeared to be struggling to lift himself out of depression following the deaths of his wife and his mother.

Police in the west-central Arizona town of Kingman found several pounds of explosives and improvised bombs in a motorhome where Jones had been living in recent weeks in a recreational vehicle park.

The Cluff home in Panaca was left uninhabitable, Lee said. The rented Ford Flex that Jones drove there was obliterated.

The sheriff said a crater 3 feet deep and 10 feet around was left where the vehicle was parked, and large chunks of debris landed up to a mile away.

Bomber's target has no idea why he, his family were chosen
Bombing remains a mystery 2 years after rattling Nevada town
Bombs found, detonated before RV Park reopened
Bomb scare evacuation order lifted
Austin bombing suspect blows himself up as SWAT moves in