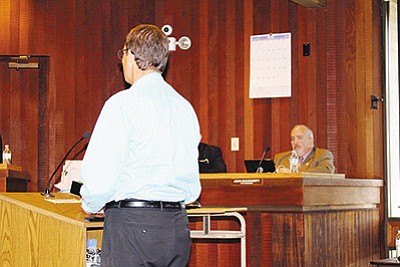 Building official Jim McErlean, left, speaks to the City Council as City Manager John Dougherty listens at Tuesday’s meeting. The Council agreed to give Dougherty more discretion in handling disputes between the owners of older downtown buildings and their contractors – and city building officials. (DOUG MCMURDO/Miner)

KINGMAN - City Manager John Dougherty will have more discretion - and flexibility - when it comes to permitting construction improvements to older buildings - particularly those in the resurgent historic downtown.

Contractors who specialize in new construction will have to strictly adhere to the International Building Codes, like they have for years, but those who remodel older buildings will enjoy a more relaxed approach, within reason.

Dougherty said he and Gary Jeppson, the city's director of Development Services, were in disagreement on how strictly the code is followed.

Downtown investors have long complained the city was too rigid in how Building Official Jim McErlean and others interpreted an older-building specific volume of the IBC, making it cost prohibitive to bring older buildings up to code.

Dougherty said the complaints he has heard also focus on the city's refusal to consider what the building would be used for, as well.

The options for the Council was to grant Dougherty more flexibility or to hear "every appeal" a builder files regarding any number of requirements.

Dougherty said the city's role should only involve the building's safety and whether the space is suitable to meet the owner's intended function.

Councilor Stuart Yocum said the Council "has to be more business friendly," particularly with the new owners of older properties with plans to resurrect them. "They need to get them fixed up as soon as possible," said Yocum. "We need to perpetuate the current progress, not hamstring them with every single little code.

Abram said the city should consistently consider the age of the building and the work being performed. If it is to beautify or otherwise primarily serve a cosmetic purpose, there's no need to require items that might be mandated in the building codes that strictly apply to new construction.

McErlean told the Council that he and Fire Marshal Chris Weaver have offered to talk to owners and remodelers beforehand to act as advisors on what would be required.

Attorney Mark Sippel, who went through the permitting process for his downtown office, told the Council it needed to change its culture when it comes to downtown, saying he had a single minor unchecked item before he could get his occupancy permit - something that wasn't required when he started the work - but was not allowed to move in his office furniture and equipment and was forced to rent storage space.