National Column: For Trump to lose, Clinton must win 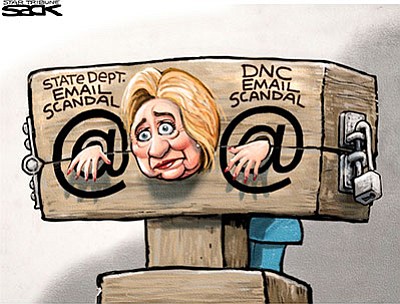 Lizard-brain narcissism." "Disgusts a significant number of people in his own party." Says things "one might expect from a patient in a mental institution." The subject is Donald J. Trump, and the speakers are all prominent conservative writers. (Jonah Goldberg, Jennifer Rubin, Stephen F. Hayes.)

Trump appalls them. They fear his election would both endanger the country and destroy the Republican Party as a home for principled conservatism. They desperately want Trump to lose, and the harder he falls the better their chances of restoring coherence to their party.

But for Trump to lose, Hillary Clinton must win. Disaffected conservatives must do more than not support Trump. They must lay off Clinton.

This is not mission impossible. No informed observer would see Clinton as anything other than a left-of-center moderate. And recall all the important Republicans lining up to praise Clinton when she was secretary of state. It all changed when she ran for president.

We get what they're doing. Hammering at Clinton has become a way for otherwise thoughtful conservatives to ingratiate themselves with an angry Republican base little interested in their ideas. They have thus magnified her imperfections and banged the drums of fake scandals, including some dismissed by the Republicans' own investigators. They have fed ancient conspiracy theories that were nonsense the first time around.

Now they must see to it that Trump is a no-term president. To help in that effort will require a change of habits.

Some horrified conservatives see an escape from their dilemma in the third-party candidacy of Gary Johnson. A former Republican governor of New Mexico, Johnson is now running as the Libertarian Party candidate. The admirable Johnson makes no secret of his contempt for Trump, and he's called Clinton a "great public servant."

But the next president is not going to be Johnson. It's going to be Trump or Clinton. Denying Trump a vote is not so powerful as adding one for Clinton. In a close election, that could make a difference.

Timid conservatives could take a cue from Rubin, who, in her Right Turn blog for The Washington Post, directly supports Clinton. She has gone beyond that, offering Clinton some sound advice for attracting more Republican voters.

Rubin has certainly earned her bona fides as a stiletto-tongued voice for the conservative movement. (Anyone who doubts that should know how often she irritates the heck out of people like me.)

Among elected Republicans, Ohio Gov. John Kasich has stood tall in his refusal to wade in the Trumpian swamps. He famously boycotted the recent Republican convention held in his own state. And when the Trump forces tried to bite him, he mocked them back. Kasich is clearly positioning himself for a possible presidential run in 2020.

But - and I know this is nitpicky, given the level of his resistance - it would have been nice had his recent column in the New Hampshire Union Leader focused on the disastrous Trump rather than on what's wrong with Hillary. True to his decent brand of politics, Kasich stuck to issues, but his focus was a clear evasion of what was really eating him.

Horrified conservatives can play it as they see fit. Their spoken support for Clinton might range from considerable to nonexistent. The least they can do is stop trashing her. Saying that Clinton is awful but Trump is more awful is nuance that won't register with a lot of voters. As we keep hearing, this is a binary choice, and Clinton is the only sane option.