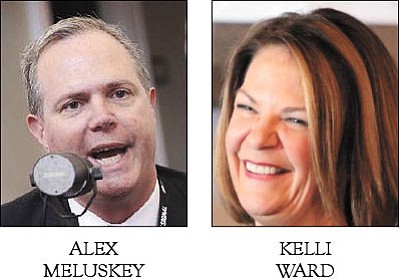 KINGMAN - Two Republican challengers to Sen. John McCain dished out tidbits on some of their proposed policies should voters put them in a Senate seat.

Former state Sen. Kelli Ward and businessman Alex Meluskey were both passionate about replacing McCain, a who's been in office since since 1983, and pumping fresh blood into U.S. government. They're seeking the GOP nomination in the race.

Ward, 47, is a family physician and has lived in Lake Havasu City for 17 years. She and her husband, Michael Ward, moved to Arizona from Garden City, Mich. She would be the first female senator representing Arizona in Washington, D.C.

Meluskey, 48, moved from New Jersey to Scottsdale with his wife, Roberta, and has lived in Arizona for more than five years. He founded and owns Optimum Graphics USA, a printing and promotional products company.

They answered questions about issues important to Mohave County and Arizona voters.

Ward was in Phoenix in between stops. Meluskey was in Northern Arizona.

What hits Mohave County the hardest?

Ward: "Many of the issues are best handled at local level whether state, county or city. As a U.S. senator, I'd try to keep the federal taxes and regulations in check. We need to let things get handled on the local level."

Interstate 11 Fast Track: Would they push to get it completed quicker?

Ward: "I think we have to be cautious. We need to balance the budget and secure the border before taking on ambitious infrastructure projects. McCain's foreign policy is invade the world and invite the world. Our infrastructure has been neglected by the policies put in place by career politicians. It's a great idea but we have to look at what our priorities are."

Meluskey: "If it makes sense free market wise and it's good for commerce and the economy, bottom line, if it's constitutional and the people go for it, then yes."

Water Rights: Water rights hit close to home with our proximity to the Colorado River and major aquifers. Who should control who gets our juice?

Meluskey: "I'd love to get the BLM away from regulating water rights."

He proposed building pipelines from the Mississippi and Missouri rivers to channel flood waters to Arizona.

"Why aren't we building pipelines between the rivers?" he asked. "You can have a pipeline to Iowa. They get flooded out every summer. Reroute when they're having an overage to the Colorado. Allow the water to be rerouted during a flood."

Ward: "Water is a scarce resource that should be subject to free market prices. Free markets are the only things that are fair to allocate our society's scarce resources to a satisfactory end for all involved."

Meluskey: "It is a terrorist act. We've done a weak job of profiling this guy (Omar Mateen). The FBI knew something was up. They knew he was a troublemaker. We need to do our job.

"I don't know the last time a gun killed someone. It's the perpetrator. It's the act. All you do by infringing on 2nd Amendment rights is make people more vulnerable. This is going to happen again. Until we start making people aware we are not to be messed with, they are going to continue to do this. Now is not the time to infringe on our 2nd Amendment rights."

Ward: "I've been a staunch supporter of 2nd Amendment and plan to remain so in Senate. They're inanimate objects that people use to commit crimes. Gun control restrains law abiding citizens. Criminals don't follow laws.

"We need to stop giving visas to people from countries where radical Islamic jihad is commonplace. We need to look who we let in until we have a proven process to vet people who want to come here. I don't feel safer, prosperous or free after almost 40 years of McCain in the Senate."

Illegal Immigration: Presidential candidate Donald Trump wants a wall to stop the flow of illegal immigrants. Should someone build it?

Ward: "Border security is one of my major reason for running. The impact on our economy is immense. They're getting housing, health care and welfare. They're deported and come right back. These are the things they are being rewarded with under the current administration. People that come here illegally need to know there are consequences rather than rewards. A wall is step one to national security."

Meluskey: "We could build that fence for real. We need to do what we say were going to do. Bottom line is if we enforced the laws we have on our books, we wouldn't have the issues we have now."

Jobs/Economy: What needs to be done to fire up the job market?

Meluskey: "A consumption-based tax will bring 10 million new jobs to U.S. when implemented. People are working less hours because of Obamacare. Fair tax brings back lost businesses. When I go to D.C., I understand that my guideline is the constitution. My boss is not Mitch McConnell. My boss is the people of Arizona."

Ward: "I hope they (Dot Foods, Inc.) bring those high-paying jobs to Mohave County. As a senator, I can be a great ambassador to Arizona. I can reduce taxes and regulations and put power back where it belongs; back in the hands of the people versus unelected bureaucrats."

Term Limits: Americans are sick of career politicians. Any plans to stick around for a few decades?

Ward: "I support term limits. I will not stay in Washington more than two terms. D.C. has become stagnant because people have stayed for too long. The founding fathers never envisioned an elite ruling political class. We need a change, the only way to change it is to change the people we send there."

Meluskey: "I'm vying for the people's seat, not McCain's. There are monarchies who've lasted less than McCain's term. My goal is to serve and go back and pick up the printing press. It would be a hardship to go to Washington, D.C. I'd much rather sit home and manage my business."

Why run for office?

Ward: "The main reason I'm running against him is to secure borders and protect our country. We all know border security is national security. McCain has failed in that endeavor. He wanted to build the fence to get conservatives on board but granted the amnesty bill."

Meluskey: "It's for love of country and wanting to turn my country over to my children better than we found it. I think of my grandfather who fought in the Army in World War I and World War II. He risked his life and gave up a fortune. He never lost his honor. I dishonor my family name if I don't try to put up a fight. My country needs me."