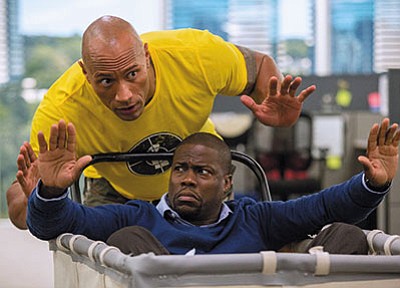 "Central Intelligence" is an action comedy from Kevin Hart which co-stars Dwayne "The Rock" Johnson that follows the adventures of a small time accountant named Calvin (Hart) who has to team up with high school punching bag turned CIA super spy Robbie (Johnson) in order to stop a terrorist plot, clear their names and save the world - all on the eve of their twentieth high school reunion.

While not the most coherent of plots, the premise does allow for some funny situations as Kevin Hart's character, who is in the midst of what can be described a crisis of ambition, he being the one voted in high school most likely to succeed at life but is now spinning his wheels at a go nowhere accounting firm, is quickly swallowed up in a world of secrets and spies.

Hart plays his character well and does deliver some funny lines and reactions throughout the film. However, it's Dwayne Johnson who steals the show as a lovable secret agent with the skills of James Bond but the heart and mind of a nerdy adolescent who never quite got over his love of unicorns, hero worship or Molly Ringwald.

Dwayne Johnson has shown in the past that he can do pretty good comedy and it comes through loud and clear as it's obvious that he's having a blast playing this character. The problem is that it doesn't always feel genuine. Dwayne Johnson is a solid actor but in this film there are times when his attempts at being a social lyawkward nerd feels, well, awkward instead of funny.

The plot itself also weakens the film as there are several instances in which it becomes questionable why Kevin Hart's character is continuing to trust and keep putting his life on the line for a person, which they establish at the beginning, isn't someone whom he was friends with nor has spoken to in twenty years. And while the movie does play out as a "is he or isn't he" style mystery, about halfway through the film it becomes fairly obvious who the real villain is. Despite trying to keep the twist alive, it ultimately falls pretty flat in the climax of the movie.

As previously mentioned, not all of the jokes hit the bullseye but the ones that do are worthy of a chuckle or two. In addition to the comedy, the action is surprisingly solid but light as only a few action set pieces play out through the film.

In the end this film is enjoyable and will hold your attention but I'd be lying if I said it was worth full ticket price. However, I would recommend it as a matinee showing or as a rental once it hits store shelves.

Give "Central Intelligence" two out of four miners.

Review: 'Jumanji' sequel serves up stars, good hearted fun
Review: Drop everything! See ‘Jumanji: The Next Level’
'Ride Along 2' filled with funny mayhem
‘Hobbs and Shaw’ is a near perfect movie
Laughs few, far between in 'Get Hard'