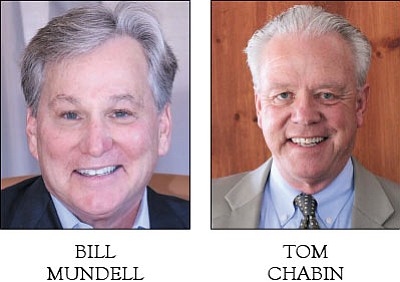 Bill Mundell and Tom Chabin are both running against three Republicans for two of three open spots in the Arizona Corporation Commission. They visited Kingman Thursday to discuss the commission's responsibilities and some of their proposed solutions.

"It doesn't matter if we're Republican, Democrat or independent, we all pay utilities," said Mundell, former ACC Commissioner, who this year is running again for the spot he vacated in 2008 after serving the maximum eight-year term.

Chabins' public service includes two terms on the Coconino County Board of Supervisors. The board appointed him to the legislature after Representative Ann Kirkpatrick resigned to run for Arizona's 1st Congressional District. He was in the legislature from 2007-2012.

Mundell served as the presiding judge of the Chandler Municipal Court from 1980 to 1986 when he resigned to run for the Arizona House of Representatives, where he served until 1992. As chairman of the House Environment Committee, he sponsored legislation protecting Arizona's environment including the state's first recycling law. Gov. Jane Hull appointed Mundell to the Arizona Corporation Commission in 1999. In 2000, he was elected to serve on the commission, completing his final term in 2008

They've been visiting every corner of the state finding out what affects Arizonans, especially rural residents, the most.

"We want to get out and talk to people and have a conversation. We want to learn about the issues important to Kingman so hopefully when we get elected in November, we'll be able to represent this area and protect the people of Kingman," Mundell said.

The candidates fired off on recent questionable practices by ACC commissioners. Reports from Ryan Randazzo from The Arizona Republic and Howard Fischer of Capitol Media Services describe investigations into elections and campaign contributions.

Meanwhile, extensive communications between the state's top utility regulator, Arizona Public Services, and a nonprofit that spent heavily on campaigns for two new regulators in 2014 have been uncovered by a nonprofit clean energy group.

During that time, Commission Chairman Bob Stump sent more than 50 private text messages to an APS executive and 46 to a political "dark money" organizer, according to the nonprofit investigating the commission.

Debates over solar energy - and a flood of money from nonprofit groups into the campaigns for those who sought to regulate utilities - marked the 2014 ACC election.

"We have a commission who is going to back (the utility companies) in the next election with a dark money campaign," said Mundell. "They're kissing up to the utilities. What is forgotten is the people who are struggling to pay their utility bills this summer."

APS and UniSource are government-sanctioned monopolies with their own territories, the candidates say.

They allege APS intervened in the recent UniSource case to raise electric rates in Mohave County. APS allegedly provided and paid for expert witnesses with studies and lawyers to participate and influence a decision.

"When you look at people who work day to day and ask them who controls their bank account, is it the utility company or do they control it?" asked Mundell.

APS and UniSource want to stomp solar power in Arizona the candidates say.

"What's happened, not only with UniSource but also APS intervening in the UniSource case, is that they want to stop homeowners from putting solar on their homes," Mundell said. "They want to crush it."

Mundell helped approve the Renewable Energy Standard and Tariff in 2006 which required electric utilities to generate at least 15 percent of their energy from renewable resources by 2025.

The proposals include incentives for customers who install solar energy technologies for their own homes and businesses. The Commission's Renewable Energy Standards encourage utilities to use solar, wind and other similar technologies to generate "clean" energy to power Arizona's future.

"They cite a decline in revenue from residential customers. They attribute the decline to solar installation," Chabin said. "But it could also be weatherization."

UniSource would recoup lost revenue by charging solar customers extra money. An additional $50 monthly fee for new solar customers would give them access to the main electric grid.

"UniSource is not against solar," Mundell said. "If they build a solar farm and you're forced to buy from them, they're happy. On the other hand, if a customer wants to put their own solar garden on their roof, that's what they want to stop."

If residents think they can sneak past UniSource, they're wrong.

Any additional hookup from a house to the electric grid requires permits from the city and an inspection by the utility company.

"They have to make sure it's ready to go before they put it on the grid," said Mundell.

"They say solar owners aren't paying their fair share. They're not telling the rest of the story," said Chabin. "If solar owners generate more energy than they use, they put the excess power back on the grid for everyone else to use."

They pointed out that utility companies can base rates based on the infrastructure needed to supply a product.

"The way rates are set by monopolies is if they build stuff," said Mundell. "If they build a new plant with lines and substations, they get to put that in the rate base and raise everybody's rates, solar and non-solar alike. If they're not building stuff, they don't get to raise everyone's rates."

"With people building their own solar gardens, companies should either keep rates the same or lower them since they don't have to build the infrastructure," he said. "That's another benefit of how solar benefits non-solar customers. The companies are concerned they're losing revenue but the numbers show they're making money."

"Why do they need another nickel from their customers?" he asked.

"I give him credit. He did come up here and do something for the people," Chabin said. "But frankly, the commission needs commissioners that are more concerned about rate payers."

"The rest of the commissioners have not shown a concern for rural Arizona," said Mundell. "They're far more concerned about politics than they are about customers of these companies."

Energy of the future

The candidates disputed the idea that solar is only efficient during daylight hours. They mentioned the TESLA Powerwall batteries as part of the future of energy.

"If you have the battery, you'll be able to store electricity at night, charge batteries during the day with solar panels and use the batteries at night to power your house," Mundell explained. "That's the future. Twenty or 30 years from now, maybe even sooner."

"That's the energy future me and Tom want to facilitate," he said.

"It's going to happen. The question is, are we going to have a commission that's going to facilitate or obstruct our future?" Chabin replied.